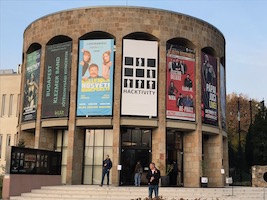 My wrap-up crazy week continues… I’m now in Budapest to attend Hacktivity for the first time. During the opening ceremony some figuresÂ were given about this event: 14th edition(!), 900 attendees from 23 different countries and 36 speakers. Here is a nice introduction video. The venue is nice with two tracks in parallel, workshops (called “Hello Workshops”), a hacker center, sponsor’ booths and… a wall-of-sheep! After so many years, you realize immediately that it is well organized and everything is under control.

As usual, the day started with a keynote.Â Costin RaiuÂ from Kaspersky presented â€œWhy some APT research is like palaeontology?” Daily, Kaspersky collects 500K malware samples and less than 50 are really interesting for his team. The idea to compare this job with palaeontology came from a picture of Nessie (the Lochness monster). We some something on the picture but are we sure that it’s a monster? Costin gave the example of Regin: They discovered the first sample in 1999, 1 in 2003 and 43 in 2007. Based in this, how to be certain that you found something interesting? Finding IOCs, C&Cs is like finding bones of a dinosaur. At the end, you have a complete skeleton and are able to publish your findings (the report). In the next part of the keynote, Costin gave examples of interesting cases they found with nice stories like the 0-day that was discovered thanks to the comment left by the developer in his code. The Costin’s advice is to learn Yara and to write good signatures to spot interesting stuff.

The first regular talk was presented byÂ ZoltÃ¡n BalÃ¡zs: “How to hide your browser 0-days?‘. It was a mix of crypto and exploitation. The ZoltÃ¡n’s research started after a discussion with a vendor that was sure to catch all kind of 0-day exploits against browsers. “Challenge accepted” for him. The problem with 0-day exploits is that they quickly become ex-0-day exploits when they are distributed by exploit kits. Why? Quickly, security researchers will find samples, analyze them and patches will be available soon. From an attacker point of view, this is very frustrating. You spend a lot of money and lose it quickly. The idea was to deliver the exploit using an encrypted channel between the browser and the dropper. The shellcode is encrypted, executed then download the malware (also via a safe channel is required).Â ZoltÃ¡n explained how he implemented the encrypted channel using ECDH (that was the part of the talk about crypto). This is better than SSL because if you control the client, it is too easy to play MitM and inspect the traffic. It’s not possible with the replay attack that implementedÂ ZoltÃ¡n. The proof of concept has been released.

Then anotherÂ ZoltÃ¡n came on stage:Â ZoltÃ¡n WollnerÂ with a presentation called “Behind the Rabbit and beyond the USB“. He started with a scene of the show Mr Robot where they use a Rubber Ducky to get access to a computer. Indeed a classic USB stick might have hidden/evil features. The talk was in fact a presentation of the Bash Bunny tool from Hak5. This USB stick is … what you want! A keyboard, a flash drive, an Ethernet/serial adapter and more! He demonstrated some scenarios:

This device is targeting low-hanging fruits but … just works! Note that it requires physical access to the target computer.

After the lunch coffee break,Â Mateusz Olejarka presented “REST API, pentester’s perspective“. Mateusz is a pentester and, by experience, he is facing more and more API when conducting penetration tests. The first time that an API was spotted in an attack was whenÂ @sehacure pwned a lot of Facebook accounts via the API and the password reset feature. On the regular website, he was rejected after a few attempts but the anti-bruteforce protection was not enabled on the beta Facebook site! Today RASK API are everywhere and most of the application and web tools have an API. An interesting number:Â  by 2018, 50% of B2B exchanges will be performed via web APIs. The principle of an API is simple: a web service that offers methods and process data in JSON (most of the time). Methods are GET/PUT/PATCH/DELETE/POST/… To test a REST API, we need some information: the endpoint, the documentation, get access to access key and sample calls. Mateusz explained how to find them. To find endpoints, we just try URI like “/api”, “/v1”, “/v1.1”, “/api/v1” or “/ping”, “/status”, “/health”, … Sometimes the documentation is available online or returned by the API itself. To find keys, two reliable sources are:

Also, fuzzing can be interesting to stress test the API. This one of my favourite talk, plenty of useful information if you are working in the pentesting area.

The next speaker wasÂ Leigh-Anne Galloway: “Money makes money: How to buy an ATM and what you can do with it“. She started with the history of ATMs. The first one was invented in 1967 (for Barclay’s in the UK). Today, there are 3.8M devices in the wild. The key players are Siemens Nixdorf, NSC and Fujitsu. She explained how difficult is was for her to just buy an ATM. Are you going through the official way or the “underground” way? After many issues, she finally was able to have an ATM delivered at her home. Cool but impossible to bring it in her apartment without causing damages. She decided to leave it on the parking and to perform the tests outside. In the second part, Leigh-Anne explained the different tests/attacks performed against the ATM: bruteforce, attack at OS level, at hardware and software level.

The event was split into two tracks, so I had to make choice. The afternoon started with Julien Thomas and “Limitations of Android permission system: packages, processes and user privacy“. He explained in details how are the access rights and permissions defined and enforced by Android. Amongst a deep review of the components, he also demonstrated an app that, once installed has no access, but, due to the process of revocation weaknesses, the app gets more access than initially.

Then Csaba Fitzl talked about malware and techniques used to protect themselves against security researchers and analysts: “How to convince a malware to avoid us?“.Â Malware authors are afraid of:

Malware hates to be analysed and they sometimes avoid to infect certain targets (ex: they check the keyboard mapping to detect the country of the victim). Czaba reviewed several examples of known malware and how to detect if they are being monitored. The techniques are multiple and, as said Csaba, it could take weeks to review all of them. He also gave nice tips to harden your virtual machine/sandboxes to make them look really like a real computer used by humans. Then he gave some tips that he solved by writing small utilities to protect the victim. Example: mutex-grabber which monitors malwr.com and automatically creates the found Mutexes on the local OS. The tools reviewed on the presentation are available here. Also a great talk with plenty of useful tips.

After the last coffee break,Â Harman Singh presented “Active Directory Threats & Detection: Heartbeat that keeps you alive may also kill you!“. Active Directories remain a juicy target because they are implemented in almost all organizations worldwide! He reviewed all the components of an Active Directory then explained some techniques like enumeration of accounts, how to collect data, how to achieve privilege escalation and access to juicy data.

Finally,Â Ignat Korchagin closed the day with a presentation “Exploiting USB/IP in Linux“. When he asked who know or use USB/IP in the room, nobody raised hands. Nobody was aware of this technique, same for me! The principle is nice: USB/IP allows you to use a USB device connected on computer A from computer B. The USB traffic (URB – USB Request Blocks) are sent over TCP/IP. More information is available here. This looks nice! But… The main problem is that the application level protocol is implemented at kernel level! A packet is based on a header + payload. The kernel gets the size of data to process via the header. This one can be controlled by an attacker and we are facing a nice buffer overflow! This vulnerability is referenced as CVE-2016-3955. Ignat also found a nice name for his vulnerability: “UBOAT” for “(U)SB/IP (B)uffer (O)verflow (AT)tack“. He’s still like for a nice logo :). Hopefully, to be vulnerable, many requirements must be fulfilled:

Ignat completed his talk with a live demo that crashed the computer (DoS) but there is probably a way use the head application to get remote code execution.

Enough for today, stay tuned for the second day!