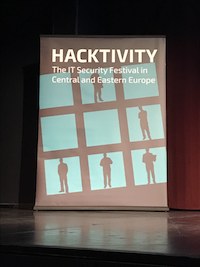 Letâ€™s go for more wrap-ups. The second day started smoothly with Haroon Meerâ€™s keynote. There was only one track today, the second room being fully dedicated to hackerspaces. Harron is a renowned speaker and the title of his keynote was â€œTime to play â€˜Dâ€™â€. The intro was simple: Nothing new, no 0-day, he decided to start his keynote based on his previous talks, especially one from 2011: “Penetration testing considered harmful“. Things changed considerably from a hardware and software point of view but we are still facing the same security issues. Example: a today’s computer is based on multiple computers (think about the MacBook Pro and its touch bar which is based on the same hardware as the Apple watch). Generic security solutions fail and an AV can still be easily bypassed. He gave many good facts and advice. Instead of buying expensive appliances, use this money to hire skilled people. But usually, companies have a security issue and they fix it by deploying a solution that… introduces new issues. He insisted and gave examples of “Dirty Cheap Solutions”. With a few lines of Powershell, we can easily detect new accounts created in an Active Directory. Aaron gave another example with a service he created: canarytokens.org. You create files, URLs, DNS records that are linked an email address and, in case of breach or unexpected access, an alert is sent to you. Another one: regular people don’t use commands lines ‘uname’, ‘ifconfig’ or ‘whoami’. Create alerts to report when they are used!

The first regular talk was given byÂ Tobias SchrÃ¶del: “Hacking drones and buying passwords in the Darknet“. What’s the relation between them? Nothing, Tobias just accepted to cover these two topics! The talk was very entertaining and Tobias is a very good speaker… The first part (drones) was made in a management style (with a tie) and the second one with a t-shirt, classic one. Why hacking drones? In Germany, like in many countries, the market for drones is growing quickly. Small models (more classified as “toys”) are using Wireless networks to be controlled and get the pictures from the camera. Those drones provide a SSID, DHCP and are managed via a web interface. So they can be compared to a flying router! There are different ways to take down a drone. The safest solution is to use eagles because they can drop out the drone out of the zone that must be secured. The attack he demonstrated was a simple de-auth attack. The second part of the talks focused on the black market. Not a lot of people already bought stuff on the Darknet (or they hide it) but they are nice webshops where you can buy passwords for many official shops like eBay, Zalando, Paypal, etc… But why a company should buy passwords on the Darkweb? A few years ago, Dropbox suffered from a mega leakÂ with millions of passwords in the wild. That’s bad but even more when corporate email addresses are present in sensitive leaks like Ashley-Madison. In Germany, a big company found 10 email addresses in this leak. If employees are free in their private life, this could have a very huge impact in case of blackmailing: “Give us access to these internal documents or we make your wife/husband aware of your Ashley-Madison account. This is a way to protect its business.

Then, Adrian Vollmer presented “Attacking RDP with Seth â€“ How to eavesdrop on poorly secured RDP connections“. Adrian explained in details how’s working the RDP protocols to authenticate users. In the past, he used Cain & Abel to attack RDP sessions but the tool is quite old and unmaintained (I’m still using it from time to time). So, he decided to write his own tool called Seth. It exploits a misconfiguration in many RDP services. RDP security is similar to SSL but not exactly the same. He explained how this can be abused do downgrade from Kerberos to RDP Security. In this case, a popup warning is displayed to the victim but it is always ignored.

After the morning coffee break, I expected a lot from this talk: “A heaven for Hackers: Breaking Log/SIEM Products” byÂ Mehmet Ince. The talk was not based on ways to abuse a SIEM via the logs that it processed but based on the fact that a SIEM is an application integrating multiple components. The methodology he used was:

He reported three cases. The first one was AlienVault. They downloaded two versions (the latest one and the previous one) and make a big diff in the files. Based on this, three problems were found: object injection, authentication bypass and IP spooking through XFF. By putting the three together, they were able to get a SQL injection but RCE is always better. They successfully achieved this by created a rule on the application that triggered a command when an SSH denied connection was reported. Evil! The second case targeted ManagEngine. The product design was bad and password to connect to remote Windows systems were stored in a database. If was possible to get access to a console to perform SQL queries but the console obfuscated passwords. By renaming the field ‘password’ to ‘somethingelse’, passwords were displayed in clear text! (“SELECT password AS somethingelse FROM …”). In the third case, LogSign, it was more destructive: it was possible to get rid of the logs… so simple! This was a nice talk.

Then, Ben Seri & Gregory Vishnepolsky presented “BlueBorne Explained: Exploiting Android devices over the air“. This vulnerability was in the news recently and is quite important:

They reviewed the basic of the Bluetooth protocol and the different services (like SDP – “Service Discovery Protocol”). They gave a huge amount of details… The finished with a live demo by compromising an Android phone via the BNEP service (“BT Network Authentication Protocol). Difficult to follow for me but a huge research!

After a lunch break and interesting discussions, back to the main theatre for the last set of talks. There were two presentations that I found less interesting (IMHO).Â Anto JosephÂ presented “Bug hunting using symbolic virtual machines“. Symbolic execution + fuzzing a winning combination to find vulnerabilities. Symbolic execution is a way to analyse the behaviour of a program to determine what inputs cause each part of a program to execute. The tool used by Anto was klee. He made a lot of demos to explain how the tool is working. It looks to be a great tool but it was difficult to follow for my poor brain.

The next talk started late due to a video issue with the speaker’s laptop. Dmitry Yudin presented ” PeopleSoft: HACK THE Planet^W university“. By university, we mean here the PeopleSoft Campus Solutions which is used in more than 1000 universities worldwide. The main components are a browser, a web server, an application, a batch server and a database. Multiple vulnerabilities have been found in this suite, Dmitry explained the CVE-2017-10366. He explained all the step to jump from one service to another until a complete compromise of the suite.

After the last break, the day finished with two interesting presentations.Â Kirils SolovjovsÂ presented “Tools for effortless reverse engineering of MikroTik routers“. Mikrotik routers are used worldwide and can be considered as a nice target. They are based on Linux, but RouterOS is based on an old kernel from 2012 and is closed source. So, we need a jailbreak! Kirils explained two techniques to jailbreak the router. He also found a nice backdoor which requires a specific file to be created on the file system. He explained many features of RouterOS and also some security issues like in the backup process. It is possible to create a file containing ‘../../../../’, so it was possible to create the file required by the back door. He released on the tools here.

To cloture the day and the conference,Â GÃ¡bor Szappanos talked about “Office Exploit Builders“. Why? Because Office documents remain the main vector of infection to drop malwares. It’s important to have “good” tools to generate malicious documents but who’s writing them?Â Â Usually, VBA macros are used but, with a modern version of Office, macros are disabled by default. It’s better to use an exploit. Based on a study conducted two years ago, APT groups lack of knowledge to build malicious documents so they need tools! GÃ¡bor reviewed three tools:

A nice presentation to close the day! So, this closes the two days of Hacktivity 2017, the first edition for me. Note that the presentations will be available on the website in the coming days!