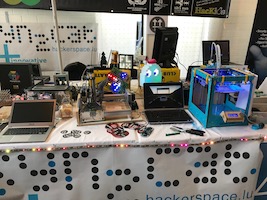 Hack.lu is already over and I’m currently waiting for my connecting flight in Munich, that’s the perfect opportunity to write my wrap-up. This one is shorter because I had to leave early to catch my flight to Hacktivity and I missed some talks scheduled in the afternoon. Thank Lufthansa for rebooking my flight so early in the afternoon… Anyway, it started again early (8AM) and John Bambenek opened the day with a talk called â€œHow Iâ€™ve Broken Every Threat Intel Platform Iâ€™ve Ever Had (And Settled on MISP)â€. The title was well chosen because John is a big fan of OSINT. He collects a lot of data and provides them for free via feeds (available here). He started to extract useful information from malware samples because the main problem today is the flood of samples that are constantly discovered. But how to find relevant information? He explained some of the dataset he’s generating. The first one is DGA or “Domain Generation Algorithm“.Â  DNS is a key indicator and is used everywhere. Checking a domain name may also reveal interesting information via the Whois databases. Even if data are fake, they can be helpful to link different campaigns or malware families together and get more intelligence about the attacker. If you can reverse the algorithm, you can predict the upcoming domains, prepare yourself better and also start takedown operations. The second dataset was the malware configurations. Yes, a malware is configurable (example: kill-switch domains, Bitcoin wallets, C2, campaign ID’s, etc). Mutex can be useful to correlated malware from different campaigns like DGA. John is also working on a new dataset based on the tool Yalda. In the second part of his presentation, he explained why most solutions he tested to handle this amount of data failed (CIF, CRITS, ThreatConnect, STIX, TAXII). The problem with XML (and also an advantage at the same time): XML can be very verbose to describe events. Finally, he explained how he’s now using MISP. If you’re interested in OSINT, John is definitively a key person to follow and he is also a SANS ISC handler.

The next talk was “Automation Attacks at Scale” by Will Glazier & Mayank Dhiman. Databases of stolen credentials are a goldmine for bad guys. They are available everywhere on the Internet. Ex: Just by crawling Pastebin, it is possible to collect ~20K passwords per day (note: but most of them are duplicates). It is tempting to test them but this requires a lot of resources. A valid password has a value on the black market but to test them, attackers must spend some bucks to buy resources when not available for free or can’t be abused). Will and Mayank explained how they are working to make some profit. They need tools to test credentials and collect information (Ex: Sentra, MBA, Hydra, PhantomJS, Curl, Wget, …). They need fresh meat (credentials), IP addresses (to make the rotation and avoid blacklists) and of course CPU resources. About IP rotation, they use often big cloud service providers (Amazon, Azure) because those big players on the Internet will almost never be blacklisted. They can also use compromised servers or IoT botnets. In the second part of the talk, some pieces of advice were provided to help to detect them (ex: most of them can be fingerprinted just via the User-Agent they use). A good advice is also to keep an idea on your API logs to see if some malicious activity is ongoing (bruteforce attacks).

Then we switched to pure hardware session with Obiwan666 who presented “Front door Nightmares. When smart is not secure“. The research started from a broken lock he found. The talk did not cover the “connected” locks that can manage with a smartphone but real security locks found in many enterprises and restricted environments. Such locks are useful because the key management is easier. No need to replace the lock if a key is lost, the access-rights must just be adapted on the lock. It is also possible to play with time constraints. They offer multiple ways to interact via the user: with something you have (a RFID token), something you are (biometrics) or something you know (a PIN code). Obiwan666 explained in details how such locks are built and, thanks to his job and background in electronics, he has access to plenty of nice devices to analyze the target. He showed X-ray pictures of the lock. X-Ray scanner isn’t very common! Then he explained different scenarios of attack. The first one was trivial: sometimes, the lock is mounted in the wrong way and the inner part is outside (“in the wild”). The second attack was a signal replay. Locks use a serial protocol that can be sniffed and replayed – no protection). I liked the “brain implant” attack: you just buy a new lock (same model), you program it to grant your access and replace the electronic part of the victim with yours…Of course, traditional lock-picking can be tested. Also, a thermal camera can reveal the PIN code if the local has a pinpad. I know some organizations which could be very interested to test their locks against all these attacks! 🙂

After an expected coffee break, another awesome research was presented by Aaron Kaplan andÂ Ã‰ireann Leverett: “What is the max Reflected Distributed Denial of Service (rDDoS) potential of IPv4?“. DDoS attacks based on UDP amplification are not new but remain quite effective. The four protocols in the scope of the research were: DNS, NTP, SSDP and SNMP. But in theory, what could be the effect of a massive DDoS over the IPv4 network? They started the talk with one simple number:

The idea was to scan the Internet for vulnerable services and to classify them. Based on the location of the server, they were able to estimate the bandwidth available (ex: per countries) and to calculate the total amount of bandwidth that could be wasted by a massive attack. They showed nice statistics and findings. One of them was a relation between the bandwidth increase and the risk to affects other people on the Internet.

Then, the first half-day ended with the third keynote. This one was presented byÂ Vladimir Kropotov, Fyodor Yarochkin: “Information Flows and Leaks in Social Media“. Social media are used everywhere today… for the good or the bad. They demonstrated how social network can react in case of a major event in the world (nothing related to computers). Some examples:

They mainly focused on the Twitter social network. They have tools to analyze the traffic and relations between people and the usage of specific hashtags. In the beginning of the keynote, many slides had content in Russian, no easy to read but the second part was interesting with the tracking of bots and how to detect them.

After the lunch break, there was again a lightning talk session then Eleanor Saitta came to present “On Strategy“. I did not follow them. The last talk I attended was a cool one: “Digital Vengeance: Exploiting Notorious C&C Toolkits” byÂ Waylon Grange. The idea of the research was to try to compromize the attackers by applying the principle of offensive security. Big disclosure here: hacking back is often illegal and does not provide any gain but risks of liability, reputation… Waylon focused on RAT (“Remote Access Tools”) like Poison Ivy, Dark Comet or Xtreme RAT. Some of them already have knownÂ vulnerabilities. He demonstrated his finding and how he was able to compromise the computer of remote attackers. But what do when you are “in”? Search for interesting IP addresses (via netstat), browser the filesystem, install persistence, a keylogger or steal credentials, pivot, etc.

Sorry for the last presentation that I was unable to follow and report here. I had to leaveÂ forÂ Hacktivity in Budapest. I’ll also miss the first edition of BSidesLuxembourg, any volunteer to write a wrap-up for me?Â  So to recap this edition of Hack.lu:

You can still expect more wrap-ups tomorrow but for another conference!