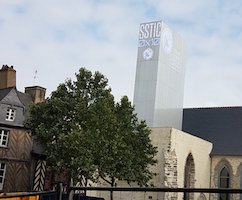 And here we go with the wrap-up of the 3rd day of the SSTIC 2018 “Immodium” edition. Indeed, yesterday, a lot of people suffered from digestive problems (~40% of the 800 attendees were affected!). This will for sure remains a key story for this edition. Anyway, it was a good edition!

The first timeslot is never an easy one on Friday. It was assigned to Christophe Devigne: “A Practical Guide to Differential Power Analysis of USIM Cards“. USIM cards are the SIM cards that you use in your mobile phones. Guest what? They are vulnerable to some types of attacks to extract the authentication secret. What does it mean? A complete confidentiality lost for the user’s communications. An interesting fact, Christophe and his team tested several USIM cards (9) – 5 of them from French operators – and one was vulnerable. Also, 75% of the French mobile operators still distribute cards with a trivial PIN code. The technology used is called “MILENAGE“. Christophe described it and the explained how, thanks to an oscilloscope, he was able to extract keys.
The second talk was targeting the Erlang language. Erlang is not widely used and was developed by Ericsson. The talk title was “Starve for Erlang cookie to gain remote code exec” and presented by Guillaume Teissier. It is used for many applications but mainly in the telecom sector to manage network devices.
Erlang has a feature that allows two processes to communicate. Guillaume explained how communications are established between the processes – via a specific TCP port – and how they authenticate together – via a cookie. This cookie is always a string of 20 uppercase characters. The talk focussed on how to intercept communications between those processes and recover this cookie. Guillaume released a tool for this.
The next talk was about HACL*, a crypto library writtenÂ in formally verified code and used by FireFox. Benjamin Beurdouche and Jean Karim Zinzindohoue explained how they developed the library (using the F* language).
Then,Â  Jason Donenfeld presented his project: Wireguard. This is a Layer-3Â secure network tunnel for IPv4 & IPv6 (read: a VPN) designed for the Linux kernel (but available on other platforms – MacOS, Android and other embedded OS). It is UDP based and provides an authentication similar to SSH and its .ssh/authentication-keys. It can replace without problemÂ a good old OpenVPN or IPsec solution. Compared to other solutions, the code is very slow and can be easily audited/reviewed. The setup is very easy:
Jason explained in details how the authentication mechanism has been implemented to ensure that once a packet reached a system was are sure of the origin. So easy to setup, here is a quick tutorial on a friend’s wiki.
The next presentation was made byÂ Yvan GENUER and focussed on SAP (“Ca sent le SAPin!“). Everybody knows SAP, the worldwide leader in ERP solutions. A lot of security issues have already been found in multiple tools or modules. But this time, the focus was on a module called SAP IGS or “Internet Graphic Services”. This module helps to render and process multiple files inside an SAP infrastructure. After some classic investigations (network traffic capture, search in the source code – yes, SAP code is stored in databases), they find an interesting call: “ADM:INSTALL”. It is used to install new shape files. They explained the two vulnerabilities found: The service allows the creation of any files on the file system and a DoS when you create a file with a filename longer than 256 characters.
The next talk was not usual but very interesting: Yves-Alexis Perez from the Debian Security Team came on stage to explain how his team is working. How they handle security issues with the Debian Linux distribution. The core team is based on 10 people (5 being really active) and other developers and maintainers. He reviewed the process that is followed when a vulnerability is reported (triage, push of patches, etc). He also reviewed some vulnerabilities from the past and how they were handled.
After a nice lunch break with Friends and some local food, back in the auditorium for two talks:Â Ivan Kwiatkowski demonstrated the tool he wrote to help pentester to handler remote shells in a comfortable way: “Hacking Harness open-source“. Ivan started with some bad stories that every pentester in the world faced. You got a shell but no TTY, you lose it, you suffer from latency, etc… This tool helps to get rid of these problems and allow the pentester to work like in a normal shell without any footprint. Other features allow, for example, to transfer files back to the attacker. It looks to be a nice tool, have a look at it, definitively!
Then, Florian Maury presented “DNS Single Point of Failure Detection using Transitive Availability Dependency Analysis“. Everybody has a love/hate relation with DNS. No DNS, no Internet. Florian came back on the core principle of the DNS and also a weak point: the single point of failure that can make your services not reachable on the Internet. He wrote a tool that, based on DNS requests, shows you if a domain is vulnerable to one or more single point of failure. In the second part of the talk, Florian presented the results of a research he performed on 4M of domains (+ the Alexa top list). Guess what? There are a lot of domains that suffer from, at least, one SPoF.

Finally, the closing keynote was presented by Patrick Pailloux, the technical director of the DGSE (“Direction GÃ©nÃ©rale de la SÃ©curitÃ© ExtÃ©rieure”). Excellent speaker who presented the “Cyber” goals of the French secret services, of course, what he was authorized to disclosed 😉 It was also a good opportunity to repeat that they are always looking to skilled security people.