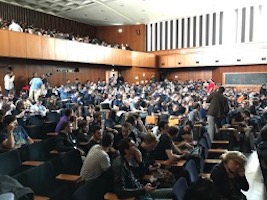 I’m in Rennes, France to attend my very first edition of the SSTIC conference. SSTIC is an event organised in France, by and for French people. The acronym means “Symposium sur la sÃ©curitÃ© des technologies de l’information et des communications“. The event has a good reputation about its content but is also known to have a very strong policy to sell tickets. Usually, all of them are sold in a few minutes, spread across 3 waves. I was lucky to get one this year. So, here is my wrap-up! This is already the fifteen edition with a new venue to host 600 security people. A live streaming is also available and a few hundred people are following talks remotely.

The first presentation was performed by Â Octave KlabaÂ who’s the CEO of the OVH operator. OVH is a key player on the Internet with many services. It is known via the BGP AS16276. Octave started with a complete overview of the backbone that he build from zero a few years ago. Today, it has a capacity of 11Tpbs and handles 2500 BGP sessions. It’s impressive how this CEO knows his “baby”. The next part of the talk was a deep description of their solution “VAC” deployed to handle DDoS attacks. For information, OVH is handler ~1200 attacks per day! They usually don’t communicate with them, except if some customers are affected (the case of Mirai was provided as an example by Octave). They chose the name “VAC” for “Vacuum Cleaner“. The goal is to clean the traffic as soon as possible before it enters the backbone. An interesting fact about anti-DDoS solutions: it is critical to detect them as soon as possible. Why? Let’s assume that your solution detects a DDoS within x seconds, attackers will launch attacks of less than x seconds. Evil! The “VAC” can be seen as a big proxy and is based on multiple components that can filter specific types of protocols/attacks. Interesting: to better handle some DDoS, the OVH teams reversed some gaming protocols to better understand how they work. Octave described in deep details how the solution has been implemented and is used today… for any customer! This is a free service! It was really crazy to get so many technical details from a… CEO! Respect!

The second talk was â€œLâ€™administration en siloâ€ by AurÃ©lien Bordes and focused on some best practices forÂ Windows services administration. AurÃ©lien started with a fact: When you ask a company how is the infrastructure organised, they speak usually about users, data, computers, partners butâ€¦ they donâ€™t mention administrative accounts. From where and how are managed all the resources? Basically, they are three categories of assets. They can be classified based on colours or tiers.

The most difficult layer to protect is… the yellow one. After some facts about the security of AD infrastructure, Â AurÃ©lien explained how to improve the Kerberos protocol. The solution is based on FAST, a framework to improve the Kerberos protocol. Another interesting tool developed by AurÃ©lien: The Terminal Server Security Auditor. Interesting presentation but my conclusion is that in increase the complexity of Kerberos which is already not easy to master.

During the previous talk, AurÃ©lien presented a slide with potential privilege escalation issues in an Active Directory environment. One of them was the WSUS server. It’s was the topic of the research presented byÂ Romain ColtelÂ and Yves Le Provost. During a pentest engagement, they compromised a network “A” but they also discovered a network “B” completely disconnected from “A”. Completely? Not really, there were WSUS servers communicating between them. After a quick recap of the WSUS server and its features, they explained how they compromised the second network “B” via the WSUS server. Such a server is based on three major components:

This database is complex and contains all the data related to patches and systems. Attacking a WSUS server is not new. In 2015, there was a presentation at BlackHat which demonstrated how to perform a man-in-the-middle attack against a WSUS server. But today, Romain and Yves used another approach. They wrote a tool to directly inject fake updates in the database. The important step is to use the stored procedures to not break the database integrity. Note that the tool has a “social engineering” approach and fake info about the malicious patch can be injected too to entice the admin to allow the installation of the fake patch on the target system(s). To be deployed, the “patch” must be a binary signed by Microsoft. Good news, plenty of tools are signed and can be used to perform malicious tasks. They use the tool psexec for the demo:

The DB being synced between different WSUS servers, it was possible to compromise the network “B”. The tool they developed to inject data into the WSUS database is called WUSpendu. A good recommendation is to put WSUS servers in the “red” zone (see above) and to consider them as critical assets. Very interesting presentation!

After two presentations focusing on the Windows world, back to the UNIX world and more precisely Linux with the init system calledÂ systemd. Since it was implemented in major Linux distribution, systemd has been the centre of huge debates between the pro-initd and pro-systemd. Same for me, I found it not easy to use, it introduces complexity, etc… But the presentation gave nice tips that could be used to improve the security of daemons started via systemd. A first and basic tip is to not use the root account but many new features are really interesting:

Nice quick tips that can be easily implemented!

The next talk was about Landlock by Michael SalaÃ¼n. The idea is to build a sandbox with unprivileged access rights and to run your application in this restricted space. The perfect example that was used by Michael is a multi-media player. This kind of application includes many parsers and is, therefore, a good candidate to attacks or bugs. The recommended solution is, as always, to write good (read: safe) code and the sandbox must be seen as an extra security control. Michael explained how the sandbox is working and how to implement it. The example with the media player was to allow it to disable write access to the filesystem except if the file is a pipe.

After the lunch, a set of talks was scheduled around the same topic: analysis of code. If started with â€œStatic Analysis and Run-time Assertion checkingâ€ byÂ Dillon Pariente, Julien Signoles. The presented Frama-C a framework of C code analysis.

ThenÂ Philippe Biondi, RaphaÃ«l Rigo, Sarah Zennou, Xavier Mehrenberger presented BinCAT (â€œBinary Code Analysis Toolâ€). It can analyse binaries (x86 only) but will never execute code. Just by checking the memory, the register and much other stuff, it can deduce a program behaviour. BinCAT is integrated into IDA. They performed a nice demo of a keygen tool. BinCAT is available here and can also be executed in a Docker container. The last talk in this set was “DÃ©sobfuscation binaire: Reconstruction de fonctions virtualisÃ©es” by Jonathan Salwan, Marie-Laure Potet, SÃ©bastien Bardin. The principle of the binary protection is to make a binary more difficult to analyse/decode but without changing the original capabilities. This is not the same as a packer. Here there is some kind of virtualization that emulates proprietary bytecode. Those three presentations represented a huge amount of work but were too specific for me.

Then,Â Geoffroy Couprie,Â Pierre ChifflierÂ presented “Writing parsers like it is 2017“. Writing parsers is hard. Just don’t try to write your own parser, you’ll probably fail. But parsers are available in many applications. They are hard to maintain (old code, handwritten, hard to test & refactor). Issues based on parsers can have huge security impacts, just remember the Cloudbleed bleed bug! The proposed solution is to replace classic parsers by something stronger. The criteria’s are: must be memory safe, called by / can call C code and, if possible, no garbage collection process. RUST is a language made to develop parsers like nom. To test it, it has been used in projects like the VLC player and the Suricata IDS. Suricata was a good candidate with many challenges: safety, performance. The candidate protocol was TLS. About VLC and parser, the recent vulnerability affecting the subtitles parser is a perfect example why parsers are critical.

The last talk of the day was about caradoc. Developed by the ANSSI (French agency), it’s a toolbox able to decode PDF files. The goal is not to extract and analyse potentially malicious streams from PDF files. Like the previous talk, the main idea was to avoid parsing issues. After reviewing the basics of the PDF file format, Guillaume Endignoux, Olivier Levillain made two demos. The first one was to open the same PDF file within two readers (Acrobat and Fox-It). The displayed content was not the same. This could be used in phishing campaigns or to defeat the analyst. The second demo was a malicious PDF file that crashed Fox-It but not Adobe (DDoS). Nice tool.

The day ended with a “rump” session (also called lighting talks by other conferences). I’m really happy with the content of the first day. Stay tuned for more details tomorrow! If you want to follow live talks, the streaming is available here.