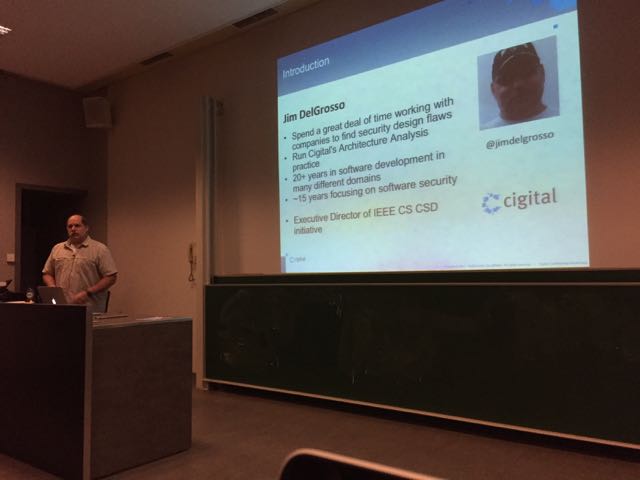 Tonight the first Belgium OWASP chapter meeting of the year 2015 was organized in Leuven. Next toÂ the SecAppDev event also organised in Belgium last week, many nice speakers were present in Belgium. It was a good opportunity to ask them to present a talk at a chapter meeting. As usual, SebaÂ opened the event and reviewed the latest OWASP Belgium news before giving the word to the speakers.

The first speaker was Jim DelGrosso from Cigital. Jim talked about â€œWhy code review and pentests are not enough?â€. His key message was the following: penetration tests are useful but they canâ€™t find all types of vulnerabilities. Thatâ€™s why other checks are required. So how to improve ourÂ security tests? Before conducting a penetration test, a good idea is just to check the design of the target application and some flaws can already be found! At this point, it is very important to make a difference between a â€œbugâ€ and a â€œflawâ€. Bugs are related to implementation and flaws are â€œby designâ€. The ratio between bugs and flaws is almost 50/50. Jim reviewed some examples of bugs: XSS or buffer overflows are nice ones. To resume, a bug is related to â€œcoding problemsâ€. And the flaws? Examples are weak, missing or wrong security controls (ex: if a security feature can be bypassed by the user). But practically, how to find them? Are they tools available? To find bugs, the classic code review process is used (we look at patterns). Pentests can also find bugs but overlaps with findings flaws. Finally, a good analysis of the architecture will focus on flows. Jim reviewed more examples just to be sure that the audience made the difference between the two problems:

Then Jim asked the question: â€œHow are we doing?â€ regarding software security. The OWASP Top-10 is a good reference for almost ten years now for most of us. Jim compared the different versions across years and demonstratedÂ that the same attacks remain but their severity level change regularly. Also, seven out of them have been the same for ten years! Does it mean that they are very hard to solve? Do we need new tools? Some vulnerabilities dropped or disappeared because developers use todayâ€™s frameworks which are more protected. Others are properly detected and blocked. A good example are XSS attacks blocked by modern browsers. Something new raised in 2013: The usage of components with known vulnerabilities (dependencies in apps).

So practically, how to find flaws? Jim recommends to perform code review. Penetration tests will find less flaws and will require more time. But we need something else: A new type of analysis focusing on how we design a system and a different set of checklists. Thatâ€™s why the IEEE Computer Society started a project to expand their presence in security. They started with an initial group of contributors and built a list of points to avoid the classic top-10 security flaws:

Heartbleed is a nice example to demonstrate how integrating external components may increase your surface attack. In this case, the openssl library is used to implement new features (cryptography) but also introduced a bug. To conclude his presentation, Jim explained three ways to find flaws:

A very interesting approach to a new way to test your applications! After a short break, the second speaker, AurÃ©lien Francillon from EURECOM, presented â€œAn analysis of exploitation behaviours on the web and the role of web hosting providers in detecting themâ€. To be more precise, the talk was about â€œweb honeypotsâ€.Â Today, most companies have a coporate website or web applications. Often they are hosted on a shared platform maintained by a hosting provider. How do they handle the huge amount of malicious traffic sent and received by their servers? The first part was dedicated to the description of the web honeypot built by EURECOM. The goal was to understand what were the motivations of web attackers, Â what they do while and after they exploited a vulnerability on a website and to understand why attacks are carried out (for fun, profit, damage, etc). There was previous studies but they lack of such details. 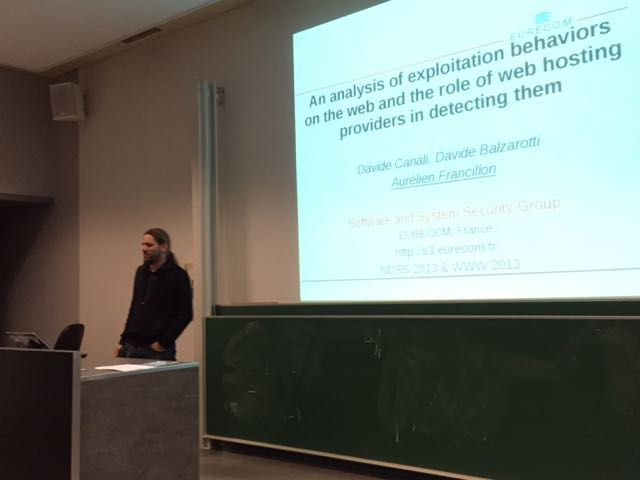 How to deploy the honeypot? AurÃ©lien explained that 500 vulnerable websites were deployed on the Internet using 100 domains registered with five subdomains each. They were hosted on nice of the biggest hosting providers. Each websites had five common CMS with classic vulnerabilities. Once deployed, the data collection occurred for 100 days. Each website acted as a proxy and its traffic was redirected to the real web apps running on virtual machines. Why? Itâ€™s easy to reinstall, they allow full logging and itâ€™s easy to tailor and limit the attackers privileges. About the collection data, it was impressive:

AurÃ©lien gave some facts about the different phases of an attack:

Based on the statistics, some trends were confirmed:

The second part of the presentation focused on hosting providers. Do they complain? How do they detect malicious activity (if they detect it)? Do they care about security? Today hosting solutions are cheap, there are millions of websites maintained by inexperienced owners. This make the attack surface very large. Hosting providers should play a key role in help users. Is it the case? HÃ©las, according to AurÃ©lien, no! To perform the tests, EURECOM registered multiple shared hosting accounts at multiple providers, they deployed web apps and simulated attacks:

In a first phase 1, they just observed the providerâ€™s reaction. The second one was to take contact with it to report an abuse (one real and one illegitimate). Twelve providers were tested from the top US-based and ten from other regions (Europe, Asia, â€¦). What were the results?
To conclude the research: most providers fail to provide correct security services, services are cheap so do not expect good services. Note that the providers names were not disclosed by AurÃ©lien!
It was a very nice event to start the year 2015! Good topics and good speakers!