During the last BruCON edition, I grabbed some statistics about the network usage of our visitors. Every years, I generate stats like the operating systems types, the top-used protocols, the numbers of unique MAC addresses, etc. But this year, we also collected all traffic from the public network. By “public“, I mean the free Wi-Fi offered to visitors during the two days. The result was two big files of ~50 Gibabytes each (one per day). This blog post is a post-analyzis of those files.

Disclaimer: The collected data (with full payload) have been used for research purposes only and were destroyed after the analysis process. Only TCP headers have been archived (as every years) for legal purposes.

Once the data collected, two issues arised. The first issue was purely technical: how to handle 100+ GB of PCAP data!? Don’t even think starting Wireshark. The way it handles PCAP files will make it collapse immediately. They are very good forensic tools which can “replay” the sessions from a PCAP but, again, free versions are not able to handle so much data. Last resort: call the NSA? They know how to handle Petabytes of data? The second issue was: what to look for?

The performance issue was solved with two NAS (1TB each) and a Linux laptop (4 cores & 8GB of memory). The first NAS was loaded with the PCAP files and used for only read operations. The second one was the target for all output files (only write operations). All devices connected to a dedicated switch as seen in the schema below: 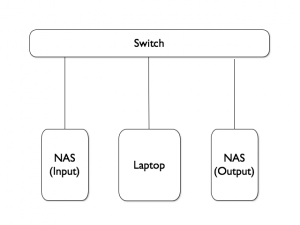 I decided to parse the PCAP files using multiple tools. The first one is the Bro IDS It can decode most protocols and create logs that could be easily parsed later. It also has a nice feature: the extraction of files from network flows.

Let’s start with the basic but critical and so controversed network service: DNS. Resolvers were provided by the DHCP server. Here are some statistics for the first day only:

What about SSH? This remote administration tool is well-know by infosec guys. If can also be used to start tunnel, transfer files. We detected 380 outgoing SSH sessions. If most people use the standard port (TCP/22), we detected other ports too:

Which SSH daemons were listening on the other side?

The graph below represents the SSH connections space:

More and more web services are available over SSL by default (Google, Twitter, Facebook). Let’s have a look at the top-20 destinations for SSL connections:

The graph below gives an overview of the SSL traffic from IP addresses to TLD’s:

Now, let’s have a look at the files downloaded by attendees. Bro has a very nice feature: it can extract files from network flows. To achieve this, just run a standard Bro instance with this extract .bro script passed in argument:

This script will save files with the right extension based on the MIME type. Results: