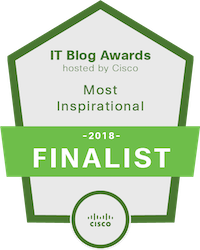 This morning, I received a mail from Cisco to tell me that I’ve been nominated as finalist for their IT Blog Awards (Category: “Most Inspirational”). I’m maintaining this blog just for the fun and to share useful (I hope) information with my readers and don’t do this to get rewards

END_OF_DOCUMENT_TOKEN_TO_BE_REPLACED

Wednesday, the first French Belgian TV channel broadcasted a documentary called “Cyber Guerilla” realized by Jean-Martial Lefranc. The same documentary was broadcasted on a French channel (TV5) beginning of 2009. I’m often suspicious about documentary proposed by generic channels which tend to represent Internet as a jungle full of bad-guys