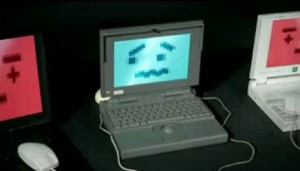 I’m often suspicious about documentary proposed by generic channels which tend to represent Internet as a jungle full of bad-guys living in dark rooms and who feed on pizza’s and Coke! But this time, I was pleasantly surprised.

The recurring theme throughout the documentary was the cyber-warfare which started against Estonia in April 2007. The mix between technical and political details was well balanced. It was not a movie against “hackers” but their actions were explained from a political point of view. It’s a fact: now, a war is first of all an online war! If you control the networks, you control all the infrastructures behind.

Some terms commonly used in the media were explained with small animations and simple words: botnet, DDoS, malware, etc.

Personally I liked the interview of John Draper aka “Captain Crunch” and his bluebox. The author correctly insisted on the difference between “hackers” and “crackers”.

The full video is available on video.google.com. Unfortunately in French. I tried to find a version with English subtitles but no luck.