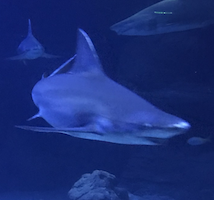 I’m just back from the social event that was organized at the aquarium Mare Nostrum. A very nice place full of threats as you can see in the picture above. Here is my wrap-up for the second day.

The first batch of talks started with â€œKNIGHTCRAWLER, Â Discovering Watering-holes for Fun, Nothingâ€ presented by FÃ©lix AimÃ©. This is FÃ©lix’s personal project that he started in 2016 to get his own threat intelligence platform. He started with some facts like the definition of a watering hole: it is the insertion of specific malicious scripts on a specific website to infect visitors. Usually, Javascript + iframe that redirect to the malicious server but it can also be a malvertising campaign (via banners). They are not easy to track because, on the malicious server, you can have protections like IP whitelists (in case of targeted attack or to keep researchers away), browser fingerprinting, etc. Then he explained how he build his own platform and the technique used to find suspicious activities: passive DNS, common crawl indexes, directory scraping, leaked DNS, … It is interesting to note that he uses YARA rules. In fact, he created his personal (legal) botnet. The architecture is based on a master server (the C&C) which is talking to crawler servers. Actually, he’s monitoring 25K targets. This is an ongoing project and FÃ©lix will still improve it. Not that it is not publicly available. He also gave some nice examples of findings like the keylogger on WordPress that we reported yesterday. He detected it for the first time a few months ago he told me! Very nice project!

The second talk was a complete review of the Wannacry attack that hits many organizations in May 2017: “The (makes me) Wannacry Investigation” presented by Alan Neville from Symantec. This is the last time that the SANS ISC InfoCON was raised to yellow! Everybody remembers this bad story. Alan reviewed some major virus infections during the last years like Blaster (2003) or Conficker (2008). These malware infected millions of computers but, in the case of Wannacry, “only” 300K hosts were infected. But, the impact was much more important: factories, ATM’s, billboards, health devices, etc. Then Alan reviewed some technical aspect of Wannacry and mentioned, of course, the famous kill-switch domain:Â iuqerfsodp9ifjaposdfjhgosurijfaewrwergwea[.]com. In fact, Symantec detected an early version of the ransomware a few months before (without the Eternal Blue exploit). They also observed some attacks in March/April 2017. But, basics security rules could have reduced the impact of the ransomware: have a proper patching procedure as well as backup/restore procedures.

After the morning coffee refill, Maria Jose Erquiaga came on stage to present: “Malware Uncertainty Principle: an Alteration of Malware Behavior by Close Observation“. This talk was a presentation of the study of the influence of web TLS interception in malware analysis. Indeed, today, more and more malwares are communicating on top of HTTPS. What will happen if we play MitM with them to intercept communications with the C&C server? Maria explained the lab that was deployed with two scenarios: with and without an intercepting proxy. 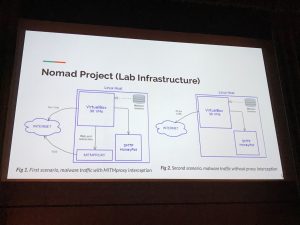 Once the project in place, they analyzed many samples and captured all the traffic. The result of this research is available online (link). What did they find? Sometimes, there is no communication at all with the C&C because the malware is using a custom protocol via TCP/443. This one is rejected by the proxy. Some malwares tried to reconnect continuously or seek another way to connect (ex: via different ports).

The next one was “Knock Knock… Who’s there? admin admin, Get In! An Overview of the CMS Brute-Forcing Malware Landscape” presented byÂ Anna ShirokovaÂ from Cisco. This talk was presented at BruCON but, being part of the organization, I was not able to follow it. Hopefully, this time was the right one.Â Iâ€™m maintaining multiple WordPress sites and, I fully agree, brute-force attacks are constantly launched and pollute my logs. Anna started with a review of the brute-force attacks and the targets. Did you know that ~5% of the Internet websites are running WordPress? This is a de-facto target. There are two types of brute-force attacks: the vertical one (a list of passwords is tested against one target) and horizontal (one password is tested against a list of targets). Brute-force attacks are not new, Anna made a quick recap from 2009 until 2015 with nice names like FortDisco, Mayhem, CMS Catcher, Troldesh, etc. And it’s still increasing… Then Anna focuses on SathurbotÂ which is a modular botnet with different features: downloader, web crawler and brute-forcer). The crawler module uses search engines to find a list of sites to be targeted (ex: “bing.com/search?q=makers%20manage%20manual“). Then the brute-force attack starts against /wp-login.php. Nice research which revealed that the same technique is always used and that many WordPress instances are still using weak passwords! Note that it is difficult to measure the success rate of those brute-force attacks).

Then Mayank Dhiman & Will Glazier presented “Automation Attacks at Scale or Understanding ‘Credential Exploitation’“. There exists many tools to steal credentials on the Internet and others to re-use them to perform malicious activities (account takeover, fake accounts creation, shopping bots, API abuse, etc). They are many toolkits that were briefly reviewed: SentryMBA, Fraudfox, AntiDetect but also more classic tools like Hydra, curl, wget, Selenium, PhantomJS. The black market is full of services that offers configuration files for popular websites. According to the research, 10% of the Alexia top websites are a config file available on the black market (which describes how to abuse them, the API, etc). Top targets are gaming websites, entertainment and e-commerce. No surprise here. To abuse them, you need: a config file, stolen credentials and some IP addresses (for rotation) and some computing power. About credentials, they are quite easy to find, pastebin.com is your best friend. Note that they need good IP addresses, best sources are cloud services or compromised IoT devices or proxy farms. They gave a case study about the large US retailer that was targeted by 40K IP addresses from 61 countries. But how to protect organizations against this kind of attacks?

The next one was “The Good, the Bad, the Ugly: Handling the Lazarus Incident in Poland” presented by Maciej Kotowicz. Maciej came back on a big targeted attack that occurred in Poland. This talk was flagged as TLP:AMBER. Sorry, no coverage. If you are interested, here is a link for more info about Lazarus.

After the (delicious) lunch,Â Daniel PlohmannÂ presented his project: “Malpedia: A Collaborative Effort to Inventorize the Malware Landscape“. Malpedia can be resumed in a few words: Free, independent, resource labeled, unpacked, samples. The idea of Malpedia came two years ago during Botconf. The idea is to propose a high-quality repository of malware samples (Daniel insisted on the fact that quality is better than quantity) properly analyzed and tagged. Current solutions (botnets.fr, theZoo, VirusBay.io) still have issues to identify properly the samples. In the Daniel’s project, samples are classified by families. What is a malware family? According to Daniel, it’s all samples that belong to the same project seen from a developer’s point of view. After explaining the collection process, he gave some interesting stats based on his current collection (as of today, 2491 samples from 669 families). Nice project and access is available upon request (if you met Daniel IRL) or by vouching for other people. Malpedia is available here.

The next talk was… hard! When the speaker warns you that some slides will contain lot of assembler code, you know what to expect! “YANT – Yet Another Nymaim Talk” was presented byÂ Sebastian Eschweiler. What I was able to follow: Nymain is a malware that uses very complex anti-analysis techniques to defeat researchers and analysts. The main technique used is called “Heaven’s Gate“. It is a mechanism to call directly 64-bits kernel core from 32-bit code. It is very useful to encrypt code, hide from static analysis tools and a nice way to evade sandbox hooks.

After the afternoon coffee break, Amir Asiaee presented “Augmented Intelligence to Scale Humans Fighting Botnets“. It started with a fact: today, they are too many malwares and too few researchers. So we need to automate as much as possible. Amir is working for a company that gets feeds of DNS request from multiple ISP’s. They get 100B of DNS queries per day! As the malwares are moving faster then yesterday, they use complex DGA, the lifetime of C&C is shorter, there is a clear need for quick analysis of all those data. Amir explained how they process this huge amount of data using NLP (“Natural Language Processing”). 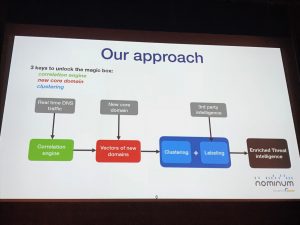 The engineering challenge is to process all those data and to spot new core domainâ€¦ when real tile is a key! Here is a cool video about the data processing. Then Amir explained some use cases. Two interesting examples:Â Bedep uses exchange rates as DGA seedâ€¦ Some others have too much coalitions (ex: [a-z]{6}.com) which could lead to many false positives: what about akamai.com?

The last talk covered the Stantinko botnet: “Stantinko: a Massive Adware Campaign Operating Covertly since 2012” byÂ Matthieu FAOU & FrÃ©dÃ©ric Vachon from Eset. It was a very nice review of the botnet. It started with some samples they received from a customer. They started the reverse engineering and, when you discover that a DLL, belonging to a MP3 encoder application, decrypts and load another one in memory, you are facing something very suspicious! They were able to sinkhole the C&C server and started further analysis. What about the persistence? The malware creates two Windows services: PDS (Plugin Downloader Service) and BEDS (Browser Extension Downloader Service). 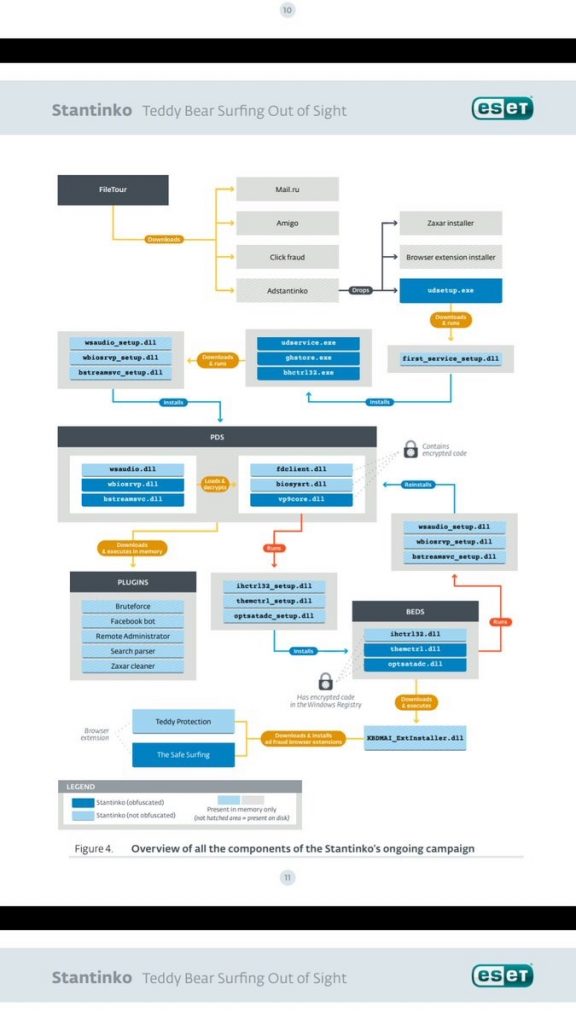 The purpose of the PDS is to compromise CMS (WordPress and Joomla), install a RAT and Facebook bot. The BEDS is a flexible plugins system to install malicious extensions in the browser. Stantinko has many interesting anti-analysis features: the code is encrypted with a unique key per infection. The analyze requires to find the dropper and aget a sample + related context. There is a fileless plugin system. To get payloads, they had to code a bot mimicking an infected machine. What about the browser extension? The Ad-Fraud injects ads on targeted websites or redirect the user to an ads websites before showing the right one. They also replace ads with their own. Note that URL’s are hashed in the config files! Another module is the search parser which search on Google or Yandex for potential victims to perform brute-force attacks. Finally, a RAT module is also available. This bot has a estimate size of 500K hosts. More details about Stantinko are available here.

The day ended with a good lightning talks sessions: 14 presentationsÂ  in 1h! Some of them were really interesting, others very funny. In bulk mode, what was presented:

See you tomorrow for the last day!