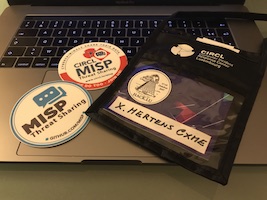 Hack.lu is ongoing in Luxembourg, already the thirteen edition! I arrived yesterday to attend a pre-conference event: the MISP summit. Today the regular talks were scheduled. It seems that more attendees joined this edition. The number of talks scheduled is impressive this year: 11 talks today and 12 talks on Wednesday and Thursdayâ€¦ Here is my wrap-up of the first day!

The first talk was not technical but very informative: â€œMyths and realities of attribution manipulationâ€ presented by FÃ©lix AimÃ© & Ronan Mouchoux from Kaspersky. Many companies put more and more efforts in infowar instead of simple malware research. This affects many topics: cyber espionage, mass opinion manipulation or sabotage. The key is to perform attribution by putting a name on a cyber attack. You can see it as putting a tag on an attack. Note that sometimes, attribution suffers from a lack of naming convention like in the AV industry. Not easy to recognise the different actors. To perform this huge task, a lot of time and skills are required. They are many indicators available but many of them can be manipulated (ex: the country of origin, the C2, â€¦). After a definition of attribution and the associated risks, FÃ©lix & Ronan reviewed some interesting examples:

As a conclusion to the talk, I like the quote: â€œYou said fileless malware? APT actors try now to be less actorâ€.

The second slot was assigned to SÃ©bastien (blotus) Blot, Thibault (buixor) Koechlin, Julien (jvoisin) Voisin who presented their solution to improve the security of PHP websites:Â Snuffleupagus (donâ€™t ask me to pronounce it ;-). The complete title was: â€œSnuffleupagus – Killing bugclasses in PHP 7, virtual-patching the restâ€. The speakers are working for a company provided hosting services and many of their customers are using PHP websites. Besides the classic security controls (OS-level hardening, custom IDS, WAF, â€¦) they searched for a tool to improve the security of PHP. Suhosin is a nice solution but it does not support PHP7. So they decided to write their own tool:Â Snuffleupagus. They reviewed how to protect PHP with very nice features like the disable_function() feature. Some examples:

You can also restrict parameters passed to functions:

Then, the speakers demonstrated real vulnerabilities in a well-known tool written in PHP and how their solution could mitigate the vulnerabilities. This is a really nice project still in development but already used by many websites from the Alexa top-ranking list! The project is available here.

After a coffee break, Bouke van Leathem presented his project: â€œRandoriâ€. In Japanse, Randori is a form of practice in which a designated aikidoka defends against multiple attackers in quick succession. To make it short, itâ€™s the principle of action-reaction: You scan me, I scan you. Randori is a low interaction honeypot with a vengeance as defined by Bouke. The main idea is to reuse the credentials tested by the attackers against themselves. Bouke explained how it developed his honeypot, mainly the pam_randori PAM module. Collected credentials are re-used, no more no less, no code is executed on the remote system. Based on the collected information, Bouke explained in the second part of his talk, how he generated useful statistics to build botnet maps. One of the tools he used for this purpose isÂ ssdeep. Note that the tool can be used in different ways: from an incident responder or ethical hacker perspectives. This project is very interesting and is also available here.

Before the lunch break, we had a keynote. The slot was assigned to Sarah Jamie LewisÂ and had the title: â€œQueer Privacy & Building Consensual Systemsâ€. She started with a nice definition of privacy: â€œPrivacy is the right to share information about youâ€¦ only with people you trustâ€. Sarah wrote a book (with the same name as her keynote) and used it to illustrate her keynote. She read samples stories about Kath, Ada, Morgan. All those people had privacy issues and have to protect themselves. During the keynote, Sarah looked really affected by those stories but was it the right place to read some samples? Iâ€™m not sure. It looks to be a book that you have to read at home, relaxed and not at a security conference (just my $0.02). About privacy, as usual, the facts reviewed during the keynote were the same: our privacy is always threatened and there is a clear lack of solution.

After the lunch, a first lightning talk session was organized followed byÂ RaÃºl B. Nettoâ€™s presentation: â€œManaTI: Web Assistance for the Threat Analyst, supported by Domain Similarityâ€. ManaTI is a project to use machine learning techniques to assist an intuitive threat analyst to help in the discovery of security issues. I missed this talk because I was out with friends.

Then Paul RascagnÃ¨res, a regular speaker at hack.lu, came to present tools and techniques to help in debugging malware code written in .Net. This framework is the key component of many Microsoft tools like Powershell. With a nice integration with the operating system, it is also used by bad guys to produce malicious code. Paul started by explained some .Net techniques used by malware (like Assembly.load()). The next part of the talk focused on PYKD, a Python extension for the WinDBG debugger. In a demo, Paul demonstrated how easy it is to use PYKD to debug malicious code.

The next talk was my preferred for this first day: â€œDevice sensors meet the web – a story of sadness and regretâ€ byÂ Lukasz Olejnik. The idea behind this talk was to demonstrate how our privacy can be affected by connected devices or, simply, our browsers. All devices today handle plenty of personal data but web technologies were not designed with privacy in mind. With the modern web, a browser on your smartphone can take advantage of many sensors or connectivity (USB, NFC or Bluetooth). Modern devices have an API that can be queried by web browsers. The first example that Lukasz gave was the batteries. The power level can be queried from a browser. Thatâ€™s a nice feature indeed but what about privacy issues? Firebox, by abusing the high precision readout can get useful information about the user behaviour. There are also evil scenarios: Just imagine that somebody is looking for a taxi and his /her battery is almost dead. The idea is to go back asap to home. If the taxi reservation page proposes 2 prices: 10â‚¬ for a 10 minutes drive and 5â‚¬ for a 30 minutes drive, guess which one will be chosen by the customer? Another example, even crazier, was the (ab)use of the light sensor in mobile phones. Lucasz demonstrated how it is possible to steal the browser history via the light sensor: The display emits light that reflects on objects and can be read/decoded. Scary! And other examples are multiple: tracking, behaviour, fingerprinting, etcâ€¦ How to mitigate this? Not easy, ask permission to the user to access the data, disable the API, purge it from dangerous calls? Finally, Lucasz gave the last example with web payments (in one click) that also have security issues. This was a very nice talk with plenty of examples that should really open our eyes!

After the afternoon coffee break, Maxime Clementz and Antoine Goichot came on stage to present: â€œMalicious use of Microsoft Local Administrator Password Solutionâ€. The local admin problem is not new with Microsoft operating systems. This account must be present and, within old environments, the password was often the same across all devices in the domain. This makes lateral movement so easy! To solve this issues, Microsoft implemented LAPS or â€œLocal Administrator Password Solutionâ€. How does it work? Random passwords are generated for the local admin. The goal of the talk was to explain how to perform privilege escalation within an environment that has LAPS deployed. In fact, this tools is not new. It was an open source project that was integrated into Microsoft Windows, a client-side extension (CSE). Itâ€™s just a DLL called AdmPwd.dll. First observation: the DLL is not signed and does not implement integrity checks. The idea of the PoC was to create a rogue DLL that ignores the temporary password expiration data and write generated passwords in a simple text file. It worked very well. Their recommendation to mitigate this kind of attack: validate the integrity/signature of the DLL.

The next presentation was about cars: â€œThe Bicho: An Advanced Car Backdoor Makerâ€ by Sheila Ayelen Berta. If we see more and more talks about connected cars, this time, it focused on â€œregularâ€ cars that just have a CAN bus. Sheila explained the tools and hardware that helps to inject commands on a CAN bus. To achieve this, she used a platform called CANspyÂ to sniff messages on a CAN bus. Then, via another tool called â€œCar Backdoor Maker 1.0â€, she was able to generate CAN bus message. Basically, itâ€™s a replay attack. A website has been created to list all CAB messages discovered:Â opencandb.online. The payload is injected using a microcontroller connected to the CAN bus. It also has GPS capabilities that allow sending the CAN bus message depending on the cat localisation! The payload generator is available here.

Then, we came back to the issues regarding sharing information. Becky Kazansky presented: â€œCountering Security Threats by Sharing Information: Emerging Civil Society Practicesâ€. I skipped this talk.

Finally, the first day finished with Parth Suhkla who presented â€œIntel AMT: Using & Abusing the Ghost in the Machineâ€. The presentation started with an overview of the AMT technology. It means â€œActive Management Technologyâ€ and is an out-of-band, management platform, embedded into Intel chipsets. The goal is to offer remote management capabilities without any OS. You can imagine that this feature looks juicy to attackers! Parth reviewed the core features of AMT and how it works. One important step is the provisioning options (can be performed via a local agent, remotely, via USB or the BIOS). There was already vulnerabilities discovered in AMT like the INTEL-SA-00075Â that covered a privilege escalation issue. AMT was also used by the PLATINIUM attacker group who used the Serial Over LAN as a back channel. In the second part, Parth explained his research: how to abuse AMT? The requirements of the attack were:

He reviewed all the possible scenarios with a rating (complex, easy, â€¦). For each attack, if also explained how to mitigate and detect such attacks. Some interesting ideas:
The last part covered the forensics investigations related to AMT. Again, an interesting talk.
Thatâ€™s all for today! Note that talks have been recorded and are already available on Youtube! After our classic â€œBelgian dinnerâ€, itâ€™s time to take some hours of sleep, tomorrow 12 talks are scheduled! Stay tuned for more wrap-ups!