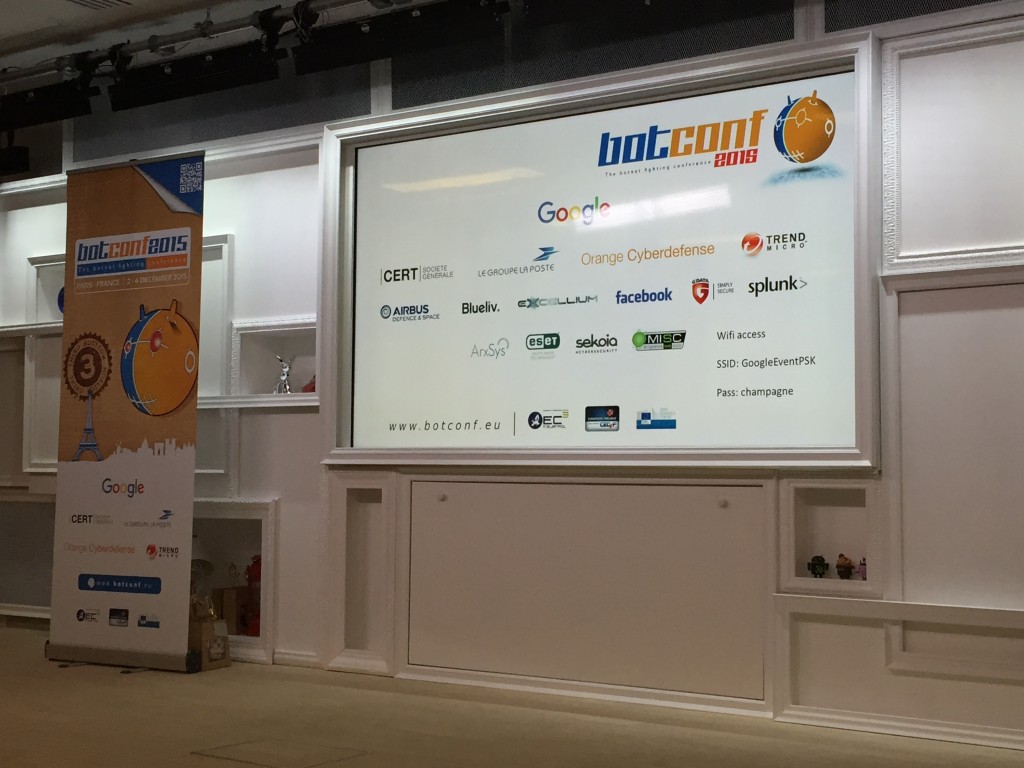 Here we go for a new edition of theÂ BotconfÂ edition. Already the third one. This conference is moving every year across France and, after Nantes and Nancy, the organizers chose Paris and more precisely the Google France venue! Really a nice one, typically in the Google atmosphere. I commuted from Belgium early and arrived in time to grab some coffee and attend the opening session by Eric Freyssinet, the chairman of the Botconf organization. To resume, the conference, here are a few numbers:

A mention to the nice idea that should be followed by all security events: they had a social media policyÂ in place this year. One comment about some talks: some speakers asked to not be recorded, others asked to not disclose information disclosed during the talk. Why not implement the TLP protocol before each presentation? Just wondering…

The first keynote slot was assigned to Margarita Louca from Europol: â€œSuccessful botnets takedowns: The good-cooperation partâ€. More precisely, it’s the EC3 (“European Cyber Crime Center“). This talk was flagged as “restricted” and not all information will be reported here. Europol is a mandatory actor in â€œtakedownâ€ operations (to bring botnets infrastructure and owners out of service).Â After a resume of the EC3 organisation and missions, she reviewed some successful takedown operations. But, as she explained, there are a lot of issues (technical, administrative): court orders canâ€™t be changed to reflect changes in botnets, lack of resources. Margarita give as example the takedown of Shylock which was considered as a bad operation. Some parts of the infrastructure can be difficult to shutdown. The example given by Margarita was about the .su domains. The challenges that authorities are facing:

Some local laws can be issues. By example, in the Netherlands, IP addresses are considered as personal data! A nice introduction to start the day.

Then, the normal schedule started with â€œPonmocup, the full story: A giant hiding in the shadowsâ€ by Maarten van Dantzig and Jonathan Klijnsma. Ponmocup is not brand new (it was already covered in previous editions of Botconf) but it is still alive (since 2006!). 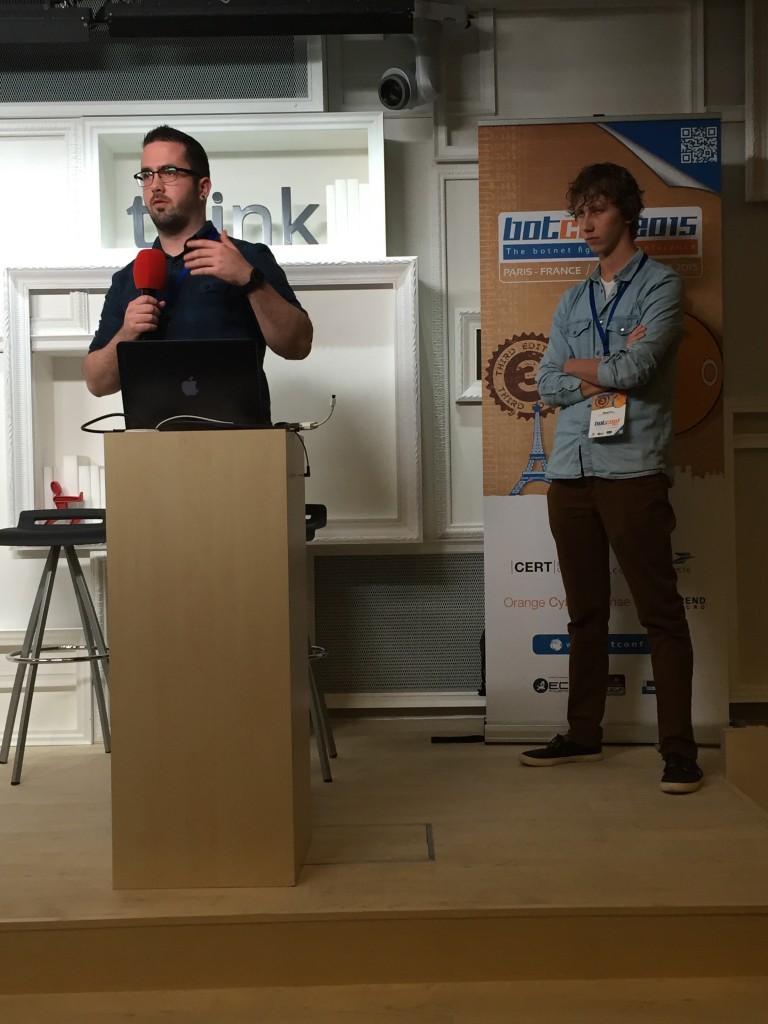 It is attributed to multiple organisations, possibly Â Russian speaking people. It infected a very high number of victims and is a multi)purpose framework. It also uses undocumented Windows API calls. In a first phase, Maarten & Jonathan explained how victimes are infected. The malware implements very nice tricks to defeat security researchers like specific referrers, cookies, IP blacklists, etc. They also implement clever techniques to prevent the direct download of the malware. Also, if you try to often, you’ll be blacklisted. Amongst the anti-analyzis features, the malware checks for processes, usernames, drivers, monitor size, recently opened documents, browsers history, installed apps, etc. Good job! During the installation phase, the malware reset system restore points and disable the system restore feature. It also open firewalls and disable UAC. A unique artefact is created per infected host based on the volume serial number! Each copy is unique to the target. The most amazing feature of Ponmocup: it’s really framework with multiple (25) modules known: AV killers, SOCKS proxy, SIP scanners, FTP stealers, system info gathering, Facebook cookie stealer, Bitcoin wallet grabber, etc. Another feature to prevent sinkholing: not all domains are deployed at once but grouped by versions of the payload. The takedown will only effect a part of the botnet. The speakers reviewed many feature of the malware, they work was really impressive. To summarize, Ponmocup:

More details were released by Fox-IT: the report and IOC’s.

To prevent sinkholing, not all domains are deployed at once but grouped by versions payloadsâ€¦ The takedown will only affect a part of the botnet. Great job!

The next talk was a short one and presented by twoÂ people: Alexander Chailykto and Aliaksandr Trafimchuk. The title was â€œDGA clustering and analysis: mastering modern, evolving threatsâ€. DGA (or â€œDomain Generation Algorithmâ€) is a key element in modern malware. This technique was first used by Conficker. 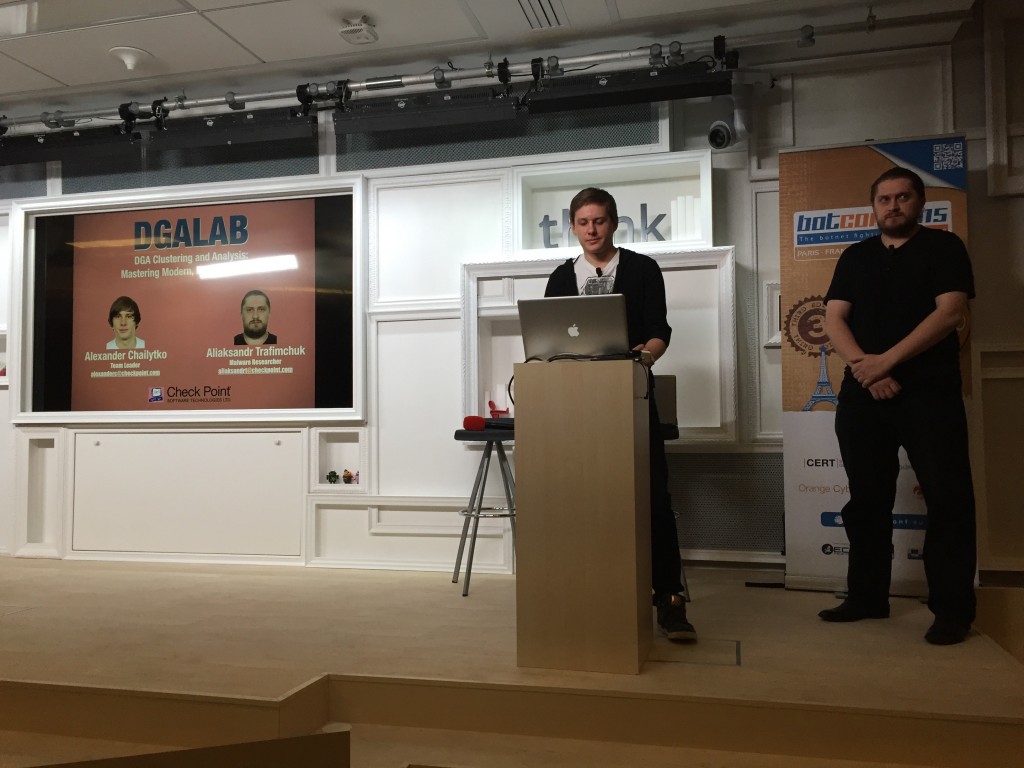 Problems with DGA are:

They developed a tool called DGALAB. It supports the following DGA Types:

The features of DGALAB are:

The tool is based on Cuckoo sandbox and Cuckoomon, running with VMware as hypervisor with some fixes in the virtual environment and a specific kernel. They finished the talk by a presentation. This tool could be very useful is integrated into an existing solution like a firewall, IDS, etc.

After the lunch, another short talk was presented by Zoltan Balazs: â€œSandbox detection for the masses: leak, abuse, testâ€. Zoltan started with some questions to the audience. It’s a fact: everybody has the same issuesâ€¦ malwares detect our sandboxes and we need more hardened sandboxes. 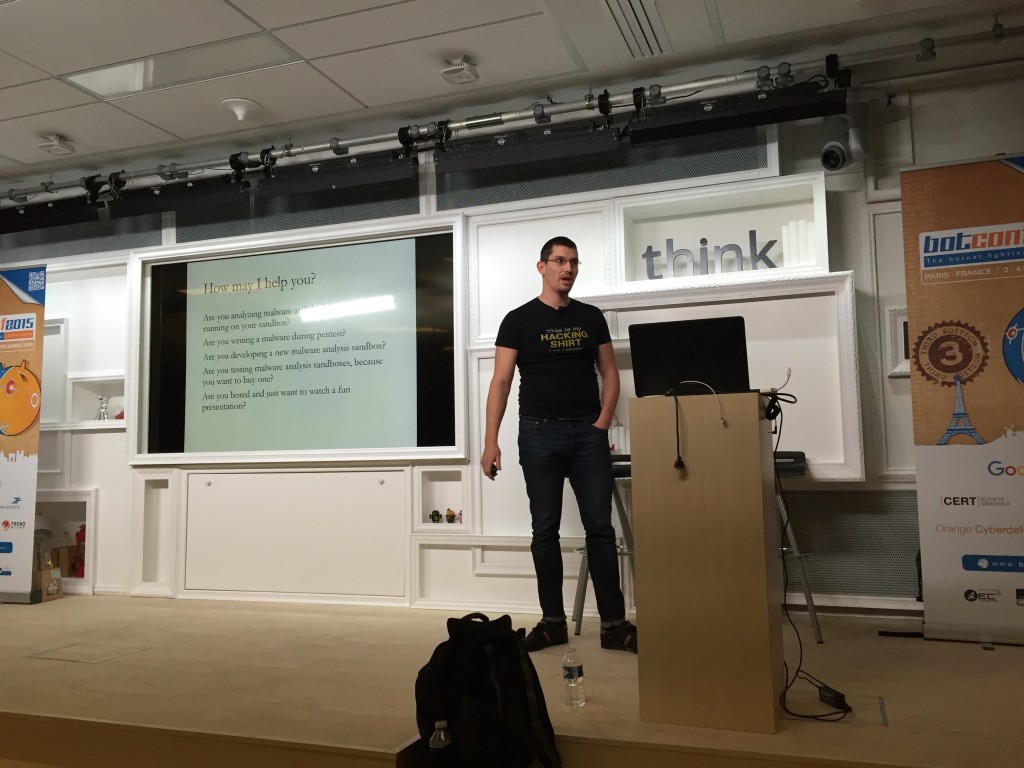 It is easy for a malware developer to detect sandboxâ€¦ Zoltan did a quick demo with VirtualBoxâ€¦ Common issues are:

Also, usually, the user desktop is a mess! It’s also possible to watch for Â CPU usage, network connections. The lessons learned: they are many ways to bypass dynamic analysis. A message for the sandbox solutions developers: try harder! It was a short talk but it deserved to be a regular one, a lot of interesting information were reported by Zoltan. I liked it!

Then Lukasz Siewierski from CERT.pl was scheduled with a talk called â€œPolish threat landscapeâ€. Lukasz told a story of a social engineering attack against a Polish company. The same story could apply to any company in any other country! 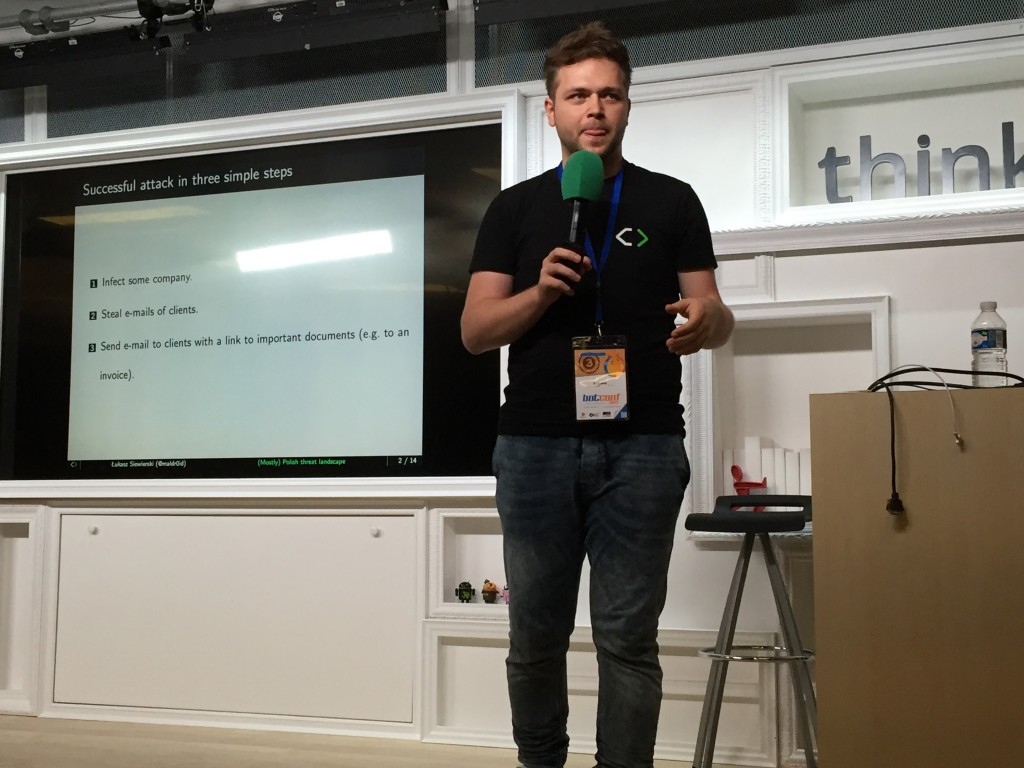 The attack scenario was a classic one: a mail was sent, someone responded, then a second mail was sent with a pseudo NDA. Once the company pwned, the attacker stole the list of customers and sent fake invoices to them from the company. Then, the presentation switched from a technical review of this case to a more nasty one. Lukasz explained how the company reacted and sued a journalist pretending that they were never hacked and customer details never disclosed… Interesting story!

Gavin Oâ€™Gorman talked about the â€œButterfly attackersâ€. Butterfly, as named by Symantec is a corporate espionage group which compromised major corporations for 3y. Here again, no recording, no disclosure of information.

Then,Â Veronica Valeros, from Cisco, presented â€œMake it count: An analysis of a brute-force botnetâ€. Her research started from a fact: we usually analyse whatâ€™s happening in the first minutes of a malware infection. What about one week, one month or at 03:00AM?

SheÂ found a sample which looked normal but a few days later, it started to have another behaviourâ€¦ It downloaded new payloads and started to perform brute-force attacks! Its target were WordPress websites. Not surprising seing the huge amount of such websites available! The attack in some numbers:

Like the previous short talk, it was very interesting. Straight to the point was nice facts!

Frank DenisÂ presented his research: â€œThe missing piece in threat intelligenceâ€. Frank is working at OVHÂ and has access to a very niceÂ source of malicious activity. 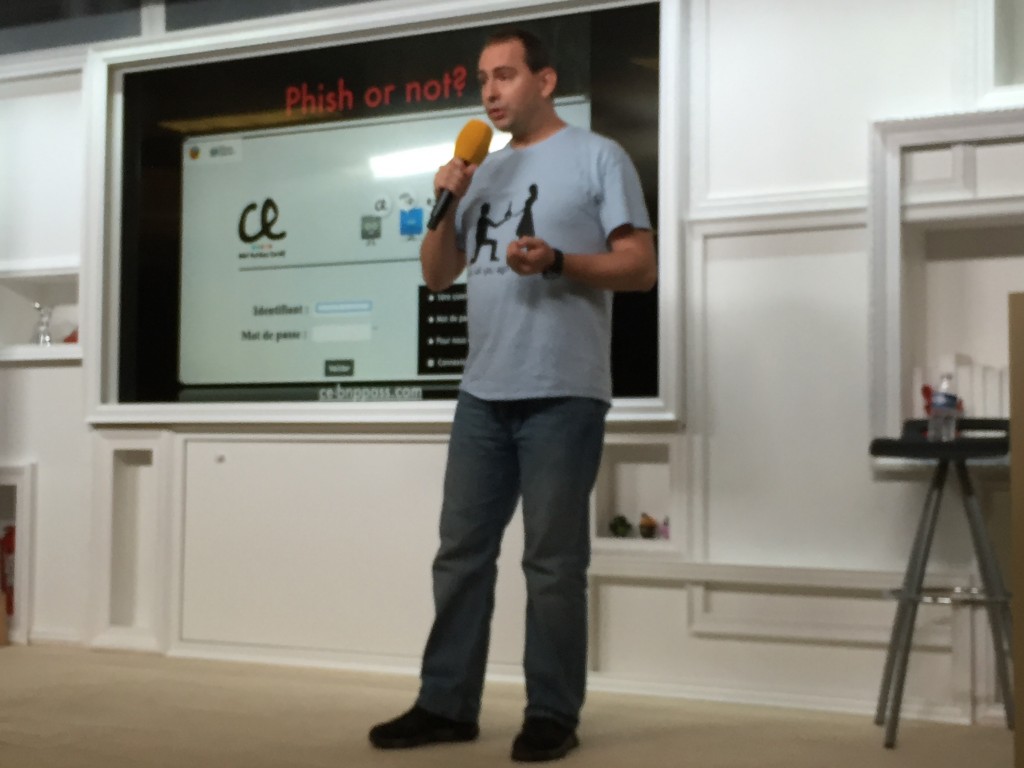 ISP’s have to deal with multiple problems. They host services that are abused, compromized and it’s very difficult to manage them. The example of IP addresses is a nice one. An IP address can be reassigned to customer and the new customer will also inherit the reputation is this IP. This could have a big impact on his business. Also, some vendors have bad behaviours and just re-use data from online services. Example: some vendors block IP addresses because their virustotal.com score is > 0! Frank explained how ISP react in bad way and have lot of issues to track the issues. Then came the idea to propose a structured language to describe actions take by ISP’s after a report. As an example, IP addresses could be flagged as:

Of course, the next challenging step is to make peers use the same language. To achieve this, Frank developed a tool called ERISÂ which helps to use the DIP protocol as named by Frank. The benefit are multiple:

A very nice idea. Now, the goal is to make others parties aware of the tool and protocol.

Marc Dioudet talked about â€œHoney!? Where is my POS?â€. The goal of hisÂ research was to understand better the techniques and procedures used to abuse POS (“Point of Sales“). 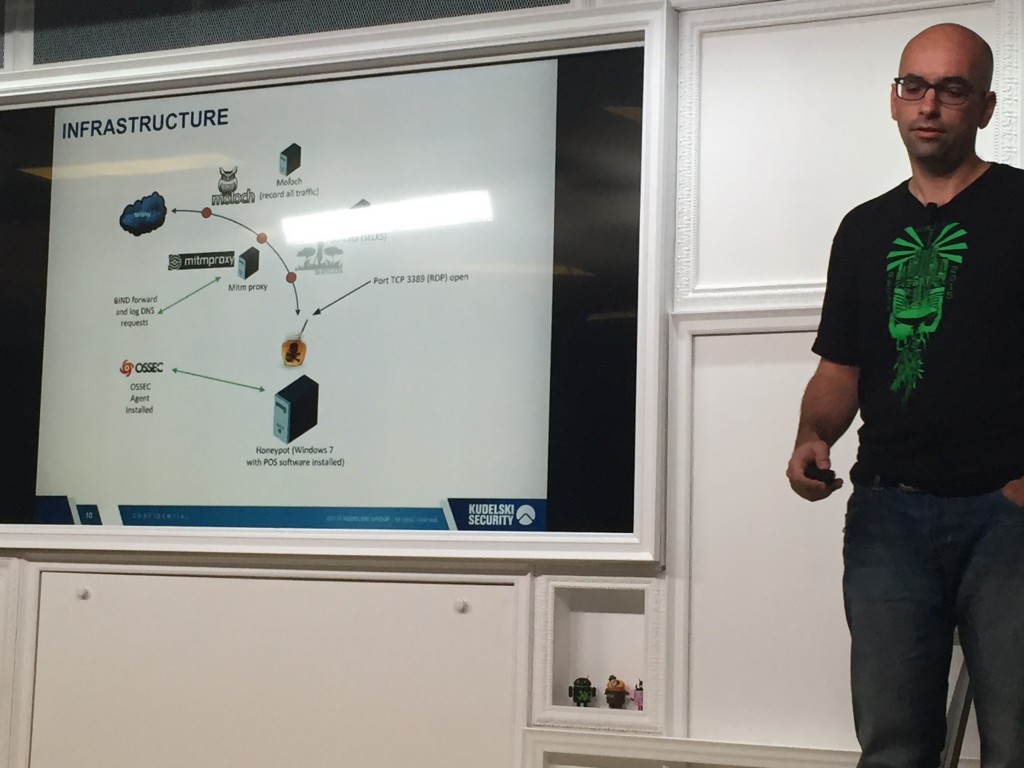 After a short review of a standard POS system and why they remains juicy targets, Marc explained the solution he deployed to build his own POS honeypot. After only three hours, he already got a hit with a good old Morto malware infection. He also explained why it was difficult to attract attackers. Initially, the server was locate in Germany where chip & pin is commonly used. Once he move the server to the US, he got more hits!

Finally, John Bambenek spoke about takedowns of botnets (again) with a presentation called â€œTakedowns; case studies ad what we all could be doing betterâ€. Like Margarita this morning, he explained why it is so difficult to organize the takedown of a botnet. 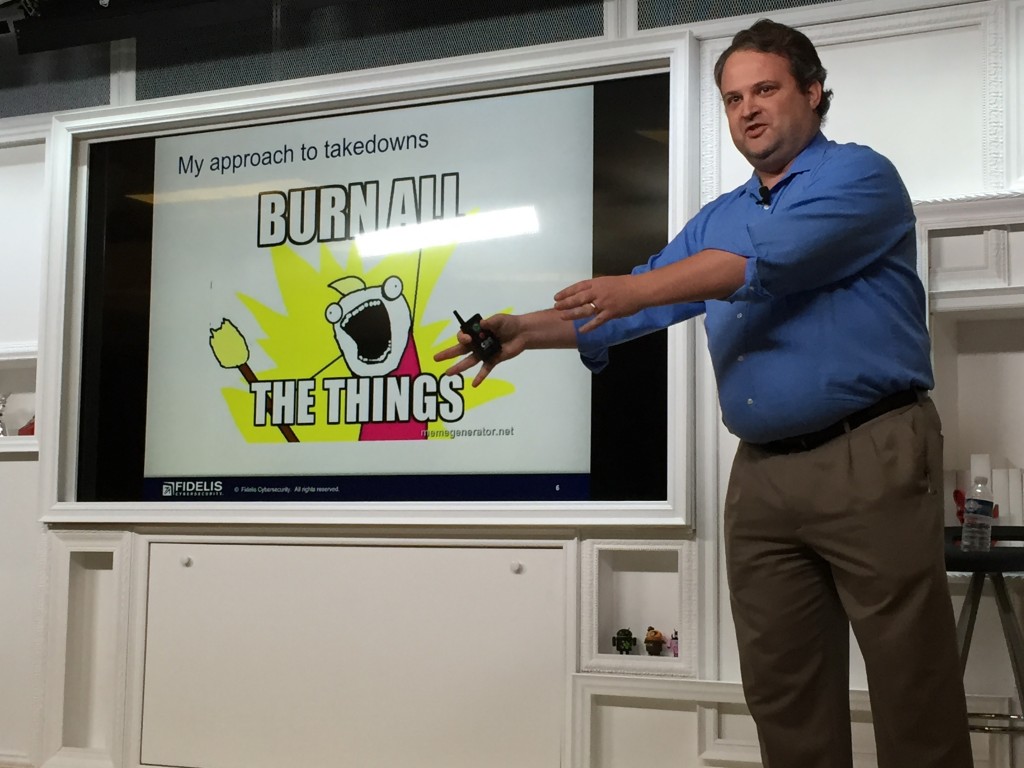 For John, our problem today is the following: We are on the losing end of an arm race. We are doomed. But it’s a good news for us, security professional, we will have enough job for us! What is a takedown? It is based on:

A fact: Why do we have to take down botnets? For John, it’s because most people can’t buy the very expensive products developed by most vendors. A takedown must be seen as a disruption because it implements new firewall rules, blacklists, DGA list examples, … Are they effective? Not always and, worse, they can have side effect! Often, actors recovers themselves within a few hours. Collateral damages are always possible. John gave the example of medical devices infected with Conficker. What about the pacemakers managed by those devices? John reviewed some nice examples of takedowns:

A nice talk with many useful information in a “do and don’t” style. This talk closed the first day! See you tomorrow for another wrap-up…