Today started the 11th edition of hack.lu in Luxembourg. Being one of my preferred event, I drove to Luxembourg this morning direction toÂ the Alvisse Parc hotel!Â The first day started with a security breakfast and a round table. Marie MoeÂ talked about medical devices. The topic was â€œHow to improve cyber safety of medical devicesâ€. Marie talked more precisely about pacemakers. She has one and her life depends on it. Thatâ€™s why sheâ€™s very concerned aboutÂ the security around those devices.

Pacemakers have remote monitoring features over wireless. For Marie, they have potential threats: Is the device vulnerable? Is the access point used vulnerable? Is the network compromised? Is the vendor server compromised? They are huge chances that the answer to those questions is yes. Other hackers, like Barnaby Jack, already disclosed some results in the same way. Another type of medical devices which was in the news recently: drugs pumps. They were vulnerable to remote attacks too. 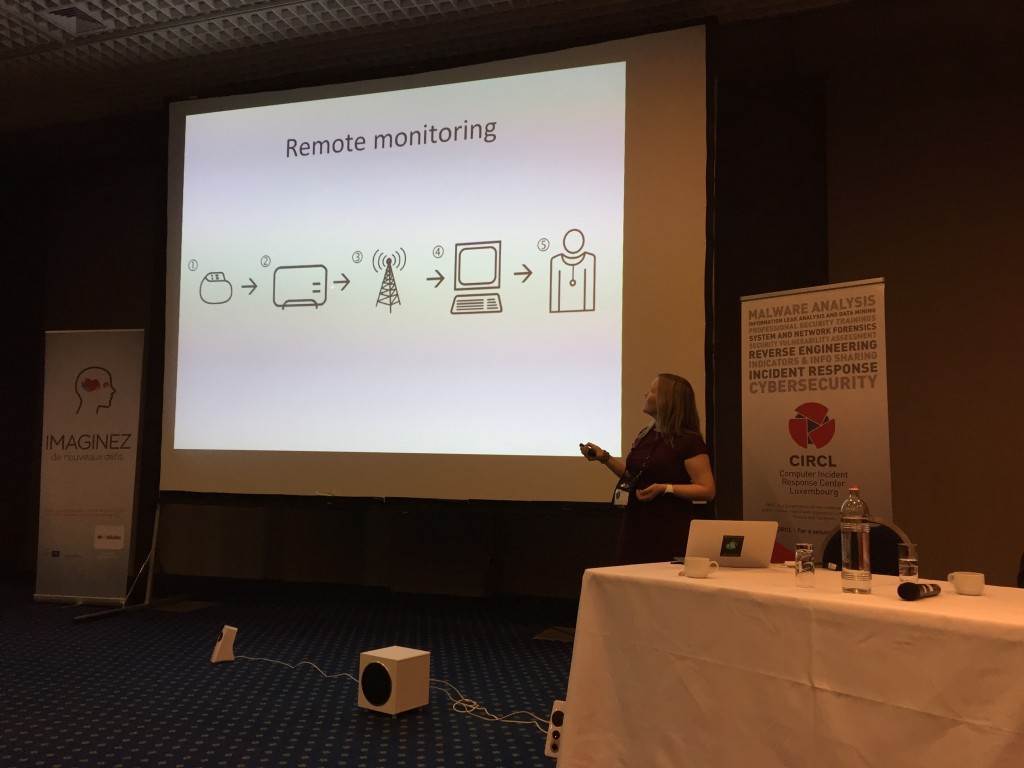 Why medical devices are so exposed? By the way they are used/deployed in hospitals. They use legacy technologies, are not updated, they are often seen as blackboxes and use proprietary software and protocols. According to Marie, we must give more focus on medical devices to improve the security. How? By doing more security researches, by increasing vendorsâ€™ awareness and by increasing the security risk monitoring. For more information about medical (as well as other connected) devices, have a look at I am The Cavalry which is anÂ organization that is focused on issues where computer security intersects public safety and human life.

Marie’s presentation was followed by a panel discussion but I left to attend theÂ Malcolm workshop proposed by SÃ©bastien Larinier and Thomas Chopitea.Â Malcom is an open source tool Â written in Python. This tool is used to better understand malware communications between malware samples and their C&C by sniffing or reading PCAPâ€™s and sharing IOC via an API. I already read a lot about this tool but never had a change to play with it. 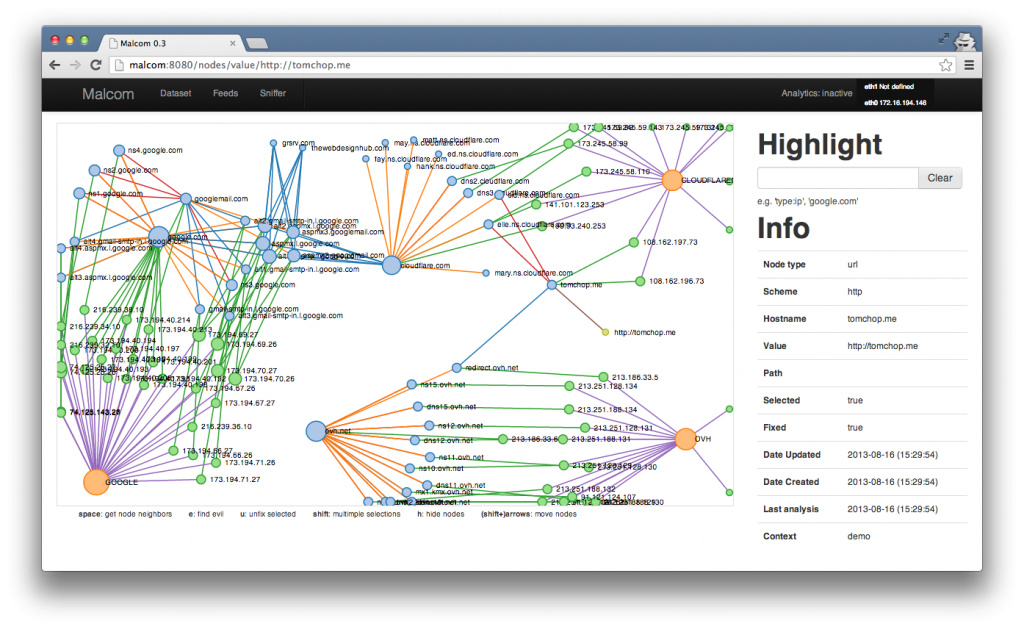 For a first contact, I enjoyed it and I decided to install it on my own network for malware analysis. The goal of this workshop was to present the features of Malcolm with different scenarios and plugins and explain the public API interaction and plugin development. See it as a â€œhigh level wiresharkâ€. It has multiple components:Â web app, feed engine, analytics engine, sniffer engine. The feed engine is really nice and help you to integrate external source of IOC’s into your Malcom instance to improve the detection of malicious activities. The workshop was well organized and we had exchanged interesting point of view and improvements for the next version.

Paul RascagnÃ¨res was present multiple times on the schedule this year. For the first time, he was asked to be a keynote speaker and receive a “green light” from the organizer about the topic. By knowing Paul, we could expect something funny and we were not disappointed!Â His keynote was called â€œInternet of Tchotchkeâ€. Based on the urban dictionary, a â€œtchotchkeâ€ is a small piece of worthless crap, a decorative knick knack with little or no purpose. He presented some researches about connected objects like wearable stuffs, sensor, Arduino’s, etc. For a world premiere, Paul presented his connected underwear fully equipped with sensors:

“Connect all the things” they said? Paul did it! This was awesome and will be remembered for a long time… 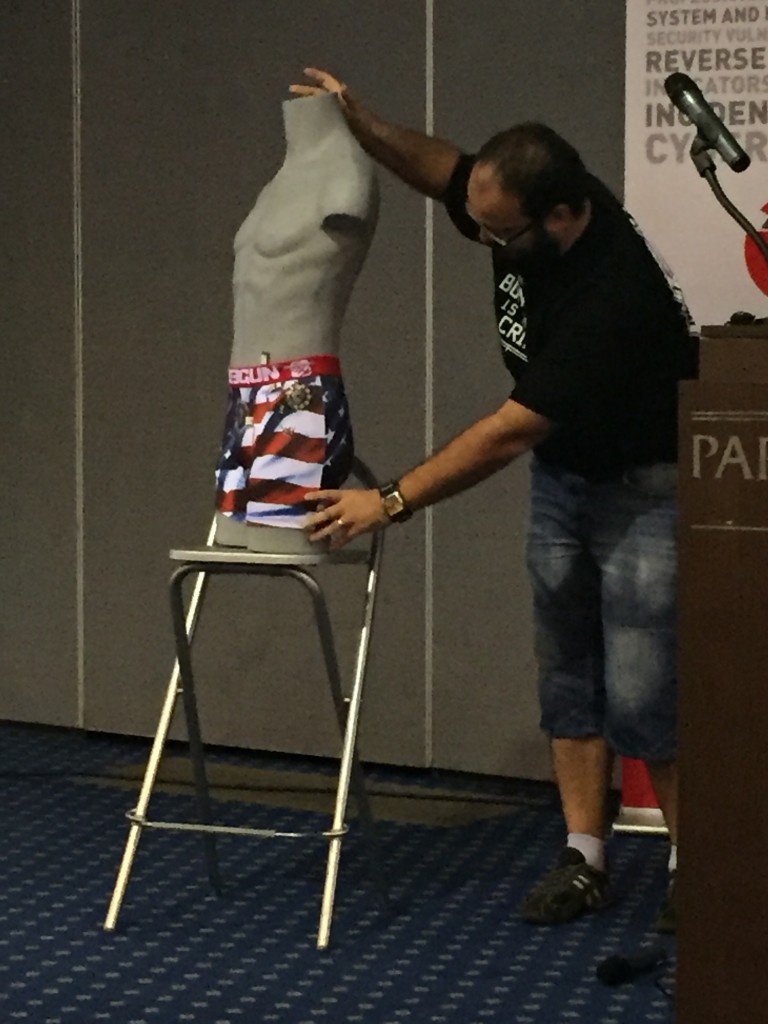 Then, Paul reviewed some hardware is tested and tried to abuse like…

But… maybe the most obscure object that you could imagine to see in a “connected” version: a sex toy sold by Marc Dorcel! I let you imagine many different ways to abuse this toy for the good or the bad! 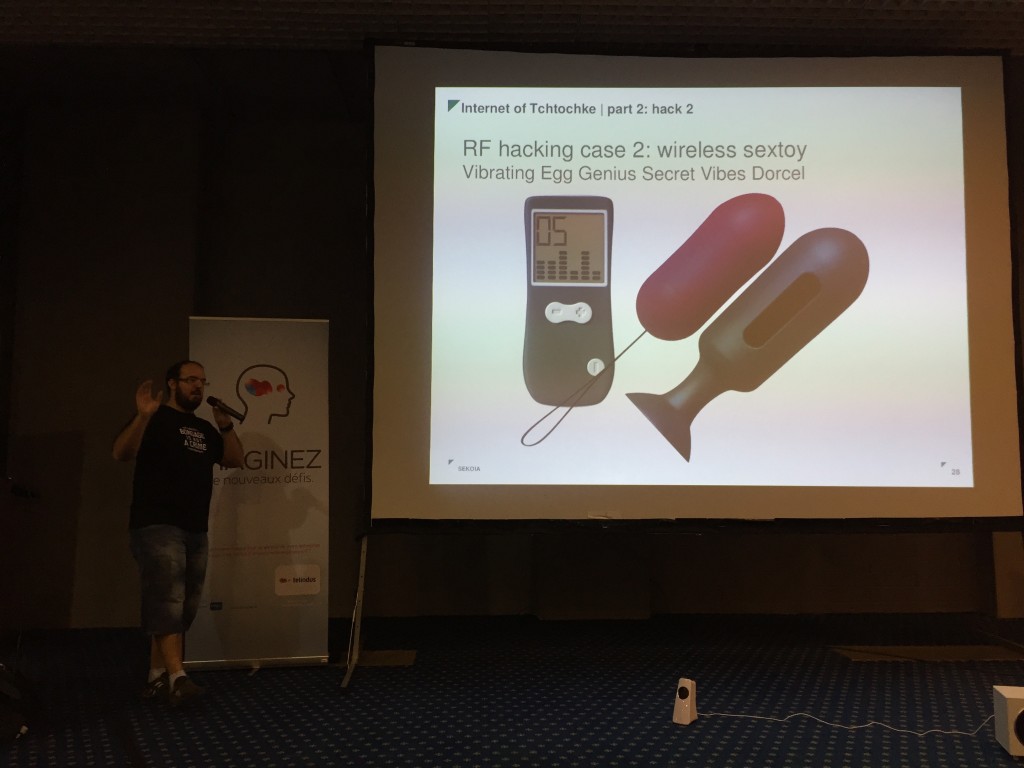 Paul concluded his keynote on more serious facts. For him, we already saw real cases of embedded system abuse? Good examples are the recent Cisco SYNful knock, payment terminal fake firmware, hacking team BIOS compromise. Paul see more and more attacks of the same time in the future.Â Can we still trust our hardware already today, routers, gateways. Is it the next trend?

After the lunch, the first lightning talk sessions was organized before a new set of speaker. I like the quick presentation of Pretty Easy Privacy by Leon Schumacher. A very interesting tool, have a look at it!Â The first speaker of the afternoonÂ was Eleanor Seitta with her talk called â€œSecurity Design and High-Risk Usersâ€. It was not a technical presentation but contained a lot of interesting ideas. Our environment is based on fundamental mistake: people built computers to make taks, then computers were connected to networks to make them perform more tasks, computer are owned and we pay people to fix them. etcâ€¦ This is a recurring issue and the approach is wrong. That’s what explained Eleanor. She defined big principles like “security“, “security design“. 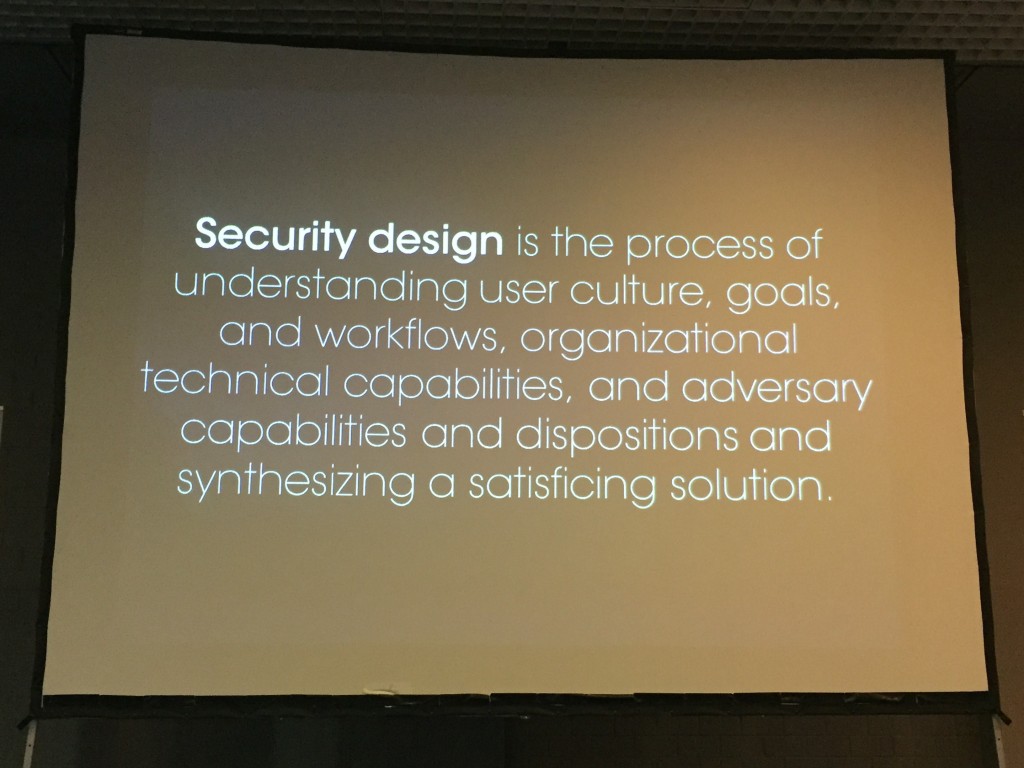 She explained how to map security tasks to the SDLC (“Software Development Life Cycle”). The next step was to define the threat modelling. Keep in mind that more you wait, more it will cost! About the security systems, don’t forget that they will be used by humans! Here is a link to Eleanor’s presentation, itÂ is worthwhile to read

Then Paul came back on stage with his friends Marion Marshalek and Joan Calvet with â€œTotally Spies!â€. Those three malware researchers have a broad knowledge of the multiple campaigns of attacks based on well-known malicious codes called Bunny, Babar, Casper, etc. 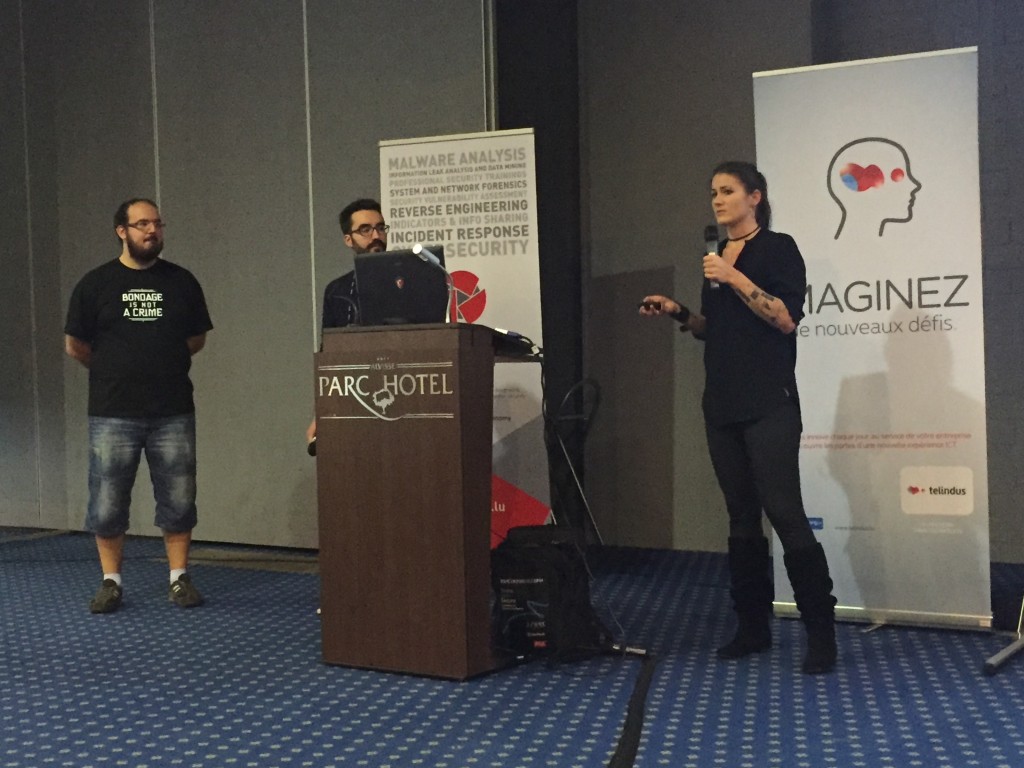 They reviewed the story of most of those malwares, when and how they were detected, what were their features, targeted systems, etc. Interesting but less funny than Paul’s keynote.

Attila Marosi presented a talk about Hacking Team: â€œHow they infected your Android device by 0-daysâ€. Hacking team RCS (â€œRemote Control Systemâ€) – product for law enforcement agencies (only!) and for all brands of mobile devices. Attila reviewed the big leak that affected hacking team in July 2015. Just to remind you, some numbers: 400GB, 53 GIT repos, 6 0-day exploits, documentation, company emails. Email is a good source of information. The hacking team’s leak helped to understand how works the market of 0-days. 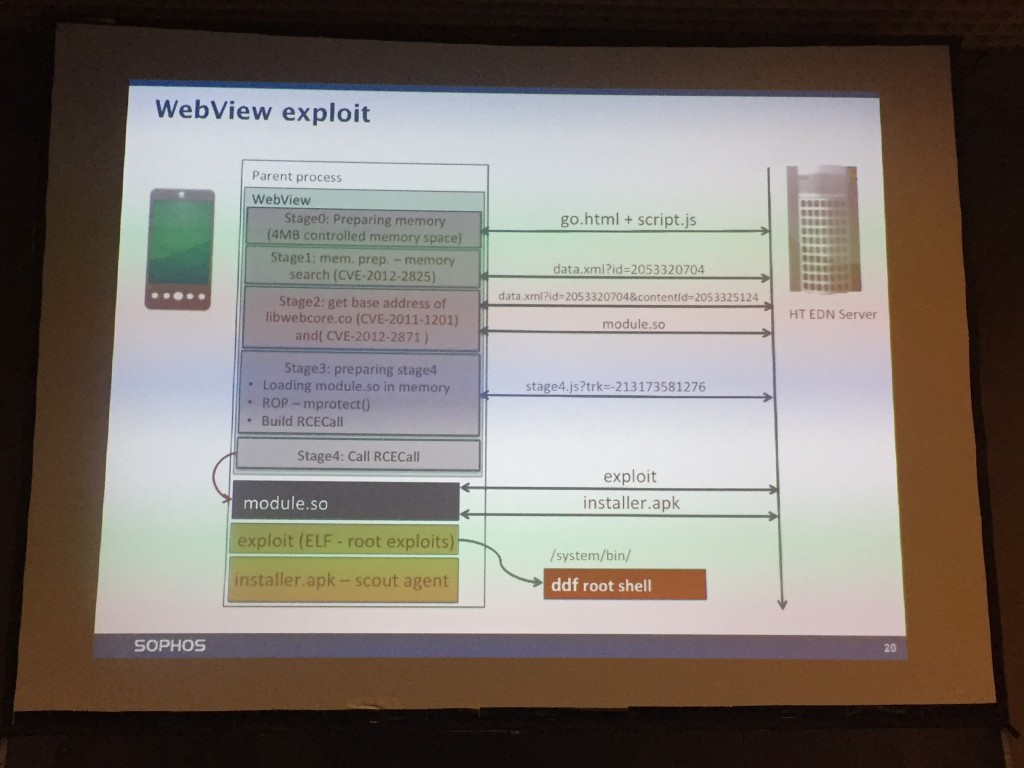 About the RCS agent on Android, the infection process was explained and what are the collected information. Installed as an admin application, it hooks the media server system to intercept all audio content (including phone conversations). Other traditional evidences are also collected (screenshots, location, clipboard content, exfiltration of data). To infect a device, they are two main ways. The boring one: a rogue email with a malicious link which is not always easy to trigger user interaction). The second one is more funny: hijack the network flows (play MitM) via public WiFi or ISP and inject content on the fly. A demo should be performed but, due to crappy wireless connectivity, it was not possible (tip for the speaker: always have a recorded video of your demos!). What is more scaring?Â Millions of vulnerable devices (4.0 Ice Cream Sandwich, 4.3 Jelly Bean) are still in the wild and the webview exploit is now publicly available. Many devices cannot be updated!

The process is the following:Â Environment -> Data -> Information -> Intelligence and intelligence is a cyclic process. The DFIR process is based on four components: Prepare -> Respond -> Restore -> Learn. For some threats, we can be pro-active. Example with blackmailing: why not scan for emails and search for sources inside the mails? Another one: Cryptolocker is a malware which communicates with C2 using time-based DGA (“Domain Generated Algorithm“). If we are able to reverse the DGA process, why not block all the domains for the next two years? Thomas & Ronan gave multiple examples and also which tools can be used to improve our daily job (MISP, FIR, CRITS) but also standards (MITRE, IETF, OpenIOC, Yara, Veris, etc). A final remark from the speakers: stop providing free audits to the bad guys! As example, they demonstrated how IP addresses of C2 changed after Mandiant released the report about APT-1!

The next talk was â€œScrutinising WPA2 password generating algorithms in wireless routersâ€ by Eduardo Novella. The talk wasÂ about to find how the WPA/WPA2 keys written on routers are generated. 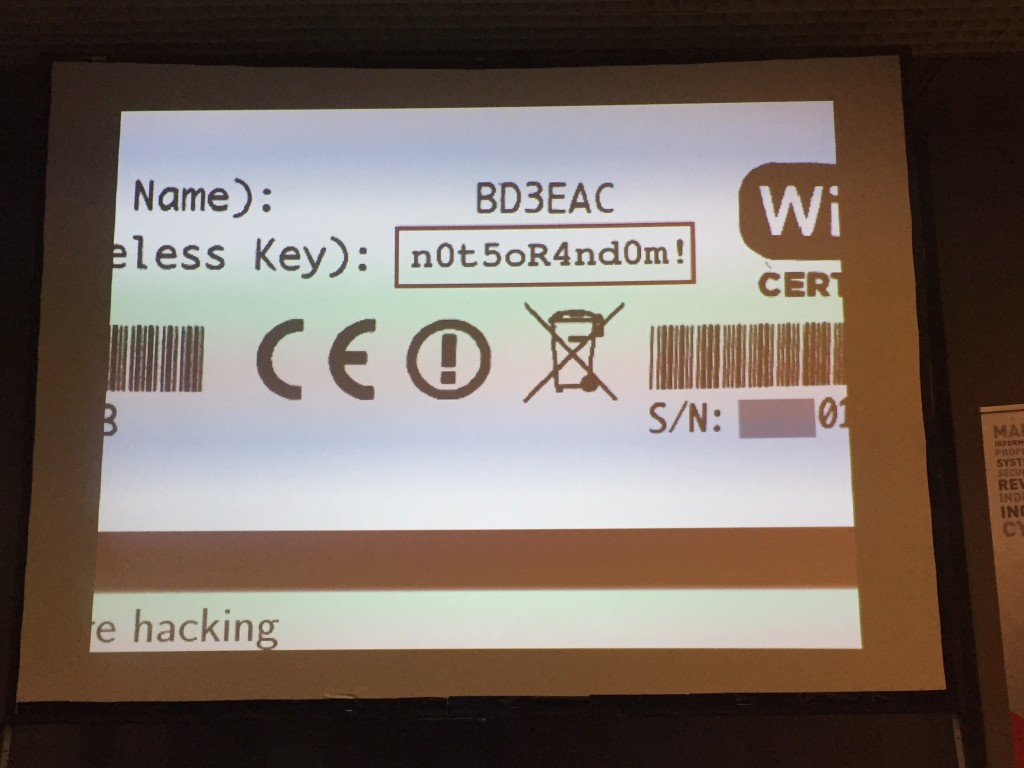 Interesting topic was very broad and Eduardo had too many slides for his allowed time slot! I started by explaining how the WPA 4-way handshake is working then he jumped into the analysis of a router firmware. The first step is to get a copy of the firmware. How? Direct download from the manufacturer, by exploiting the device, by discovering HW debug interfaces or desoldering the chip. Once the firmware acquired, it’s time to perform some reverse engineering to understand the key generation processe. After slides and slides of assembler code, Eduardo reviewed some well-known router models that he pwned. He performed a massive job with this research!

Then, a recordman came on stage: Saumil Shah! He is the guy who spoke most at hack.lu! He presented his research around steganography and his tool called Stegoploit (â€œDelivering drive-by exploits with only imagesâ€). I already attended this presentation in Amsterdam during the last edition of HITB. See my wrap-up for more details. This talk was amazing!

The last presentation for this first day was the one of Paul Jung: â€œLearn from malwares, a practical guide of spear phishing for Red Teamsâ€. A classic phishing attack is based on a 4-steps process: reconnaissance, bypass inbound security, phish and bypass outbound security.

For me, this was the best talk of the day, nothing brand new but it was clearly explained and, at each step, counter-measures were proposed to reduce the attack surface.

First,Â ask google or use tools like â€œThe Harvesterâ€, find the mail format and grab addresses (linkedin.com is a nice tool for this). Test the mail relay to validate emails, only 1 tcp connections on the firewall. We can also easily abuse SPFâ€¦ spoofing is indeed possible at body level. How to protect? Monitor your mail gateway, configure anti-bruteforce, deny mails from unknown domains, use SPF at least and work on spoofing scenarios.

Finally, he explained how to bypass outbound controls. Ex: use WinInet which support proxies! Very useful in big organizations. This was a really nice talk based on real facts and techniques.Â The first day ended with a nice social event and a walking dinner.

Keep an eye on http://archive.hack.lu/2015/ where slides should be available soon. Stay tuned for the day 2 tomorrow!