The HITB crew is back in the beautiful city of Amsterdam for a new edition of their security conference. Here is my wrap-up for the first day!

The opening keynote was assigned to Marcia HofmannÂ who worked for the EFFÂ (theÂ Electronic Frontier Foundation). Her keynote title was: â€œFighting for Internet Security in the New Crypto Warsâ€. EFF alwaysÂ fightÂ for more privacy and she reviewed theÂ history of encryption and all the bad stories about it. It started with a fact: â€œWe need strong encryption but we need some backdoorsâ€. Since encryption algorithms were developed, developers received pressure from governments to implement backdoors or use weak(er) keys to allow interceptionâ€¦ just in case of! This already happened before and will happen again. 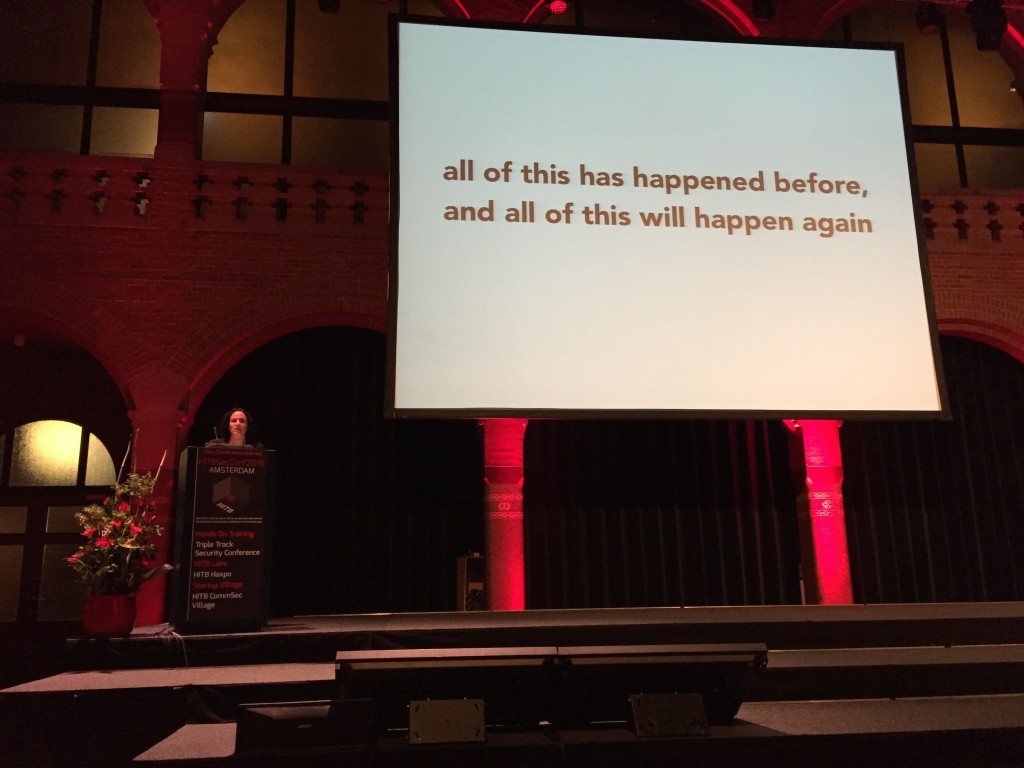 In a prologue, Marcia explained how everything started with the development of RSA and Diffie-Hellman. For some other protocols like DES, it was clear that the development team was very close to the NSA. They deliberately asked to use weakest key to help them to brute-force the keys. In the 80â€™s and 90â€™s, cryptography was developed more and more by the private sector and academic researches. Personal computers raised and people started to encrypt their data. Then came the famous PGP, key escrow and clipper chip. Marcia also explained the CALEA (â€œCommunications Assistance Law Enforcement Actâ€): The technology must be designed in the way the FBI could intercept communications if needed (of course, with a proper warrant). Then came the restriction about encryption stuff export outside the US. It was a good opportunity for Marcia to give some words about the Wassenaar agreement and the recent story about the project to prevent export of intrusion software and surveillance technology. Today, the Snowden era, governments are seen as attackers. NSA was able to tamper all our data but also infiltrated major Internet players. What about the future? What should happened and what should we do? Marcia took a pendular as example. Some forces have impacts on the way a pendula moves. There are different external pressures which affect how security is designed:

I hope that the keynote helped a lot of people to open their eyes about our privacy!

After the morning coffee break, I went to the second track to follow Pedram Hayatiâ€™s presentation: â€œUncovering Secret Connections Using Network Theory and Custom Honeypotsâ€. The first part gave background information about ourÂ classicÂ defenceÂ model and honeypots. In a traditional security model, the perimeter is very hardened but once the intruder is inside, nothing can stop him. We keep the focus on making the perimeter stronger. Itâ€™s coming from the physical security approach (the old castles) and attackers put all the efforts to bypass a single high barrier. Our second problem? We enter a battle without knowing the attackers. Idea of active defines and protection. Active defines is defined as:

AÂ security approach that actively increases the cost of performing an attack in terms of time, effort and required resources to the point where a successful compromise against a target is impossible. 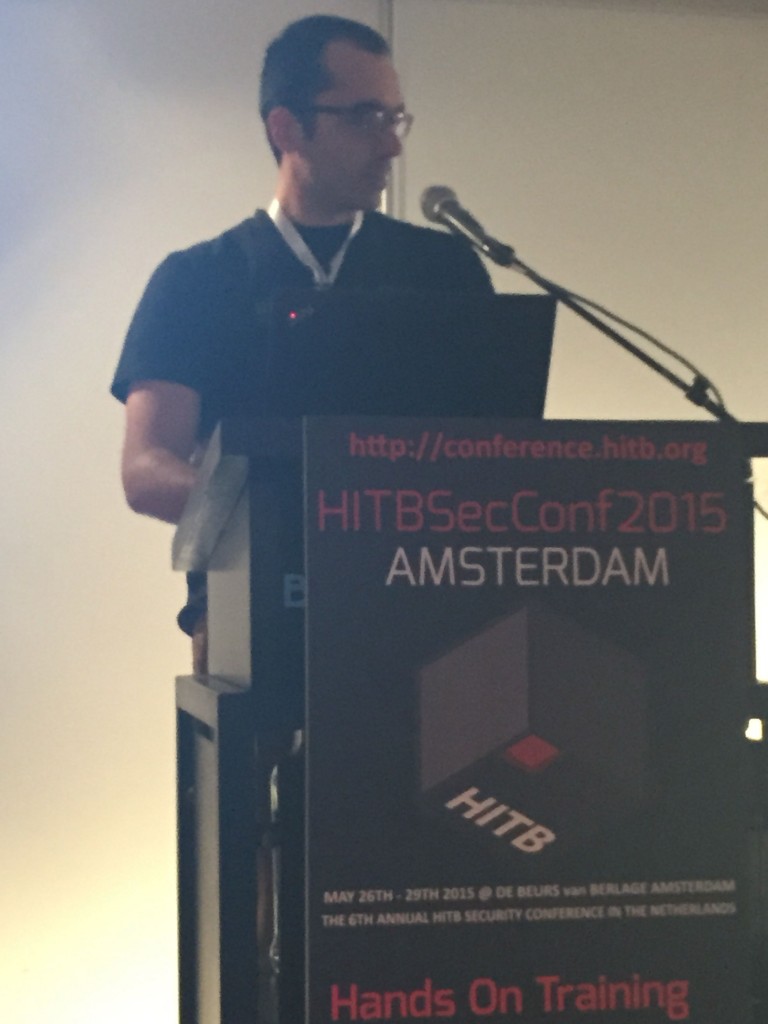 To achieve this, we need:

The Foundation is knowing the attacker! So what tools do we have? Our logs of course but honeypots can be very helpful! In the second part, Pedram explained what honeypots areâ€¦ â€œa decoy system to lure attackerâ€. They increase the cost of a successful attack: the attacker will spend time in the honeypot. It is fundamental that it looks legitimate but it has signatures and behaviour, thatâ€™s why it must be fully configurable to lure the attacker. Some principle:

The next section was the experiment. Pedram deployedÂ 13Â honeypotsÂ in major cloud providers (AWS, Google), distributed across the Internet. TheyÂ mimic a typical server and have IP addresses not published (no domain mapping). The goal was to identify SSH attacks, discover attacks profile per region and relations between them. How long to detect the first infection? On average, less than 10 mins! An analyse of the collected data was performed and it was possible to classify the attacker in three categories:

Pedram also explained how he generated nice statistics about the attackers, their behaviour and locations. To conclude, he compared the attackers as somebody throwing bricks through windows. How to we react? We can take actionsÂ to prevent this guy from sending more bricks or we can buy bullet-proof windows. Itâ€™s the same with information security. Try to get rid of the attackers!

My next choice was a talk about mobile phones operators: â€œBootkit via SMS: 4G Access Level Security Assessmentâ€ presented by Timur Yunusov and Kirill Nesterov. Today, 3G/4G network are not only used by people to surf on Facebook but are also used more and more for M2M (â€œmachine to machineâ€) communications. They explained that many operators have GGSN (â€œGPRS Gateway Support Nodeâ€) facing the Internet (just use Shodan to find some). A successful attack against such devices can lead to DoS, leak on information, fraud, APN guessing. 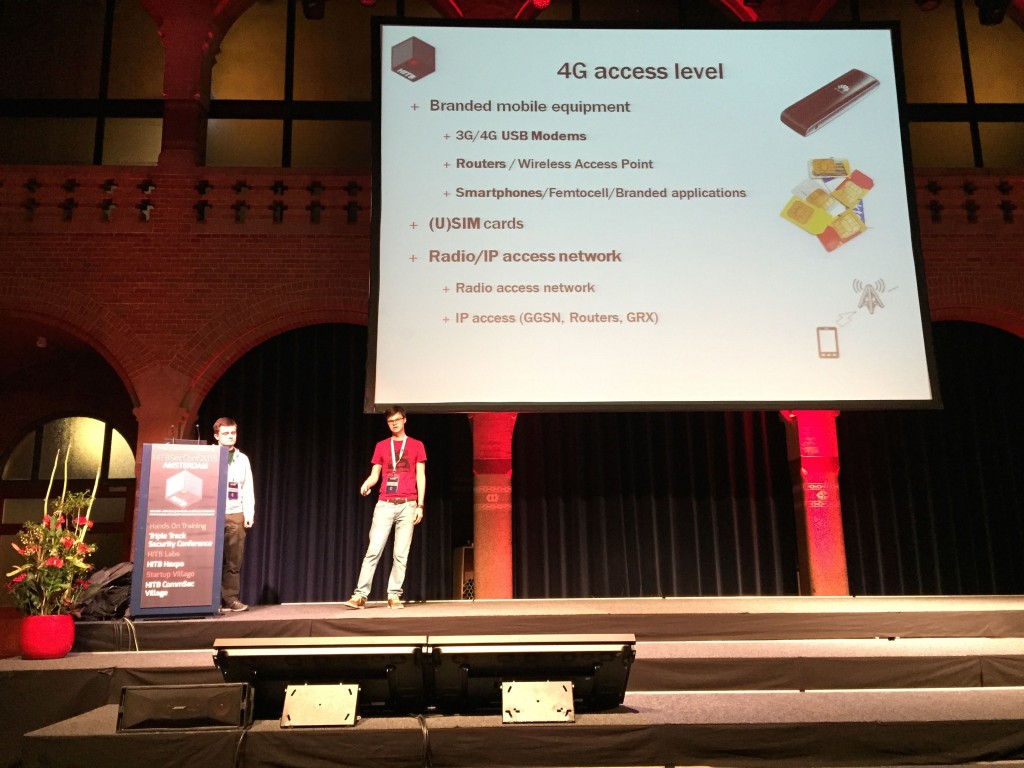 BTW, do you know that, when you are out of credit, telcoâ€™s block TCP traffic but UDP remains available? Itâ€™s time to use your UDP VPN! But attacking the network in this way is not new, the speakers focused on another path: attacking the network via SMS! About the hardware, they investigated some USB modems used by many computers. Such devices are based on Linux/Android/Busybox and have many interesting features. Most of them suffer of basic vulnerabilities like XSS, CSRC, ability to brick the device. They showed a demo video to demonstrate an XSS attack and CSRF to steal the user password. If you can own the device, the next challenge is to own the computer using the USB modem! To achieve this, they successfully turned to modem into an HID device. It is first detected as a classic RNDIS device then it is detected as a keyboard and operates like a TeensyÂ to inject keyboard keypresses. You own the modem, the computer, what about the SIM card? They explained in details how they achieve this step and ended with a demonstration where they remotely cloned a SIM card and captured GSM traffic! The best advice they can give as a concluse: always change your PIN code!

After the lunch, Didier Stevens and myself gave our workshop about the IOS forensics. I did not attend two talks but my next choice was to listen to Bas Venis, a very young security researcher,Â who talked about browsers: â€œExploiting Browsers the Logical Wayâ€. The presentation was based on â€œlogicâ€ bugs. No need to use debuggers and other complicated tools to find such vulnerabilities. Bas explained the Chrome URL spoofing vulnerability and he discovered it (CVE-2013-6636). 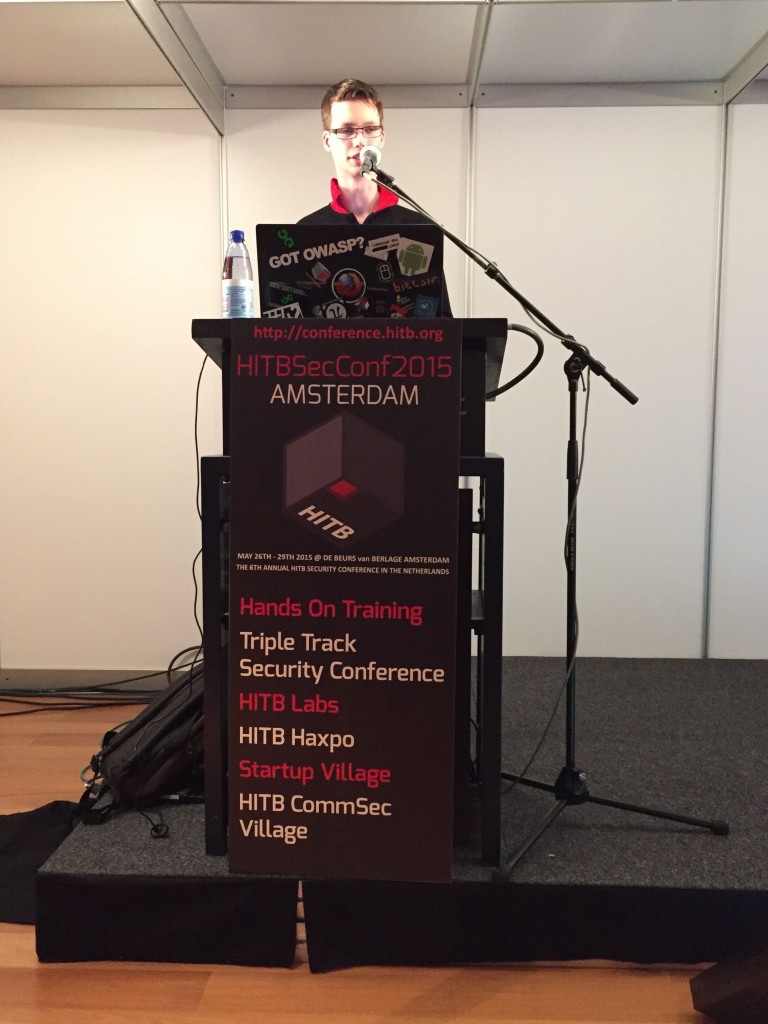 Then he switched to the Flash players. The goal was to evade the sandox. After explaining the different types of sandboxes (remote, local_with_file, local_with_network, local_trusted and application), I explained that the logic of URL/URI is not rock solid in sandboxes and lead toÂ CVE-2014-0535. The conclusion was that looking for logic bugs and using them proven to be a sensitive approach when trying to hack browsers. Sweet results can be found and they do not require tools but just dedication and creativity. Just a remark about the quality of the video, almost unreadable on the big plasma screens installed in the room.

Finally, the first day ended with a rock-start: Saumil Shah who presented â€œStegosploit: Hacking with Picturesâ€. This presentation is the next step in Saumilâ€™s research about owning the user with pictures. In 2014 at hack.lu, he already presented â€œHacking with picturesâ€. Whatâ€™s new? Saumil insisted in the fact that â€œA good exploit is one delivered with styleâ€. Pwning the browser can be complicated, why not just find a way to simple trick the exploit? The first part was a review of the history of steganography which is a technique used to hide a message into a picture, without altering it. Then came the principle of GIFAR: One file file with a JAR file appended to it. Then webshells raised with theÂ embeddingÂ of tags like â€œ<?php>â€ or â€œ<% â€¦ %>â€. Finally EXIF data were used (example to deliver a XSS). 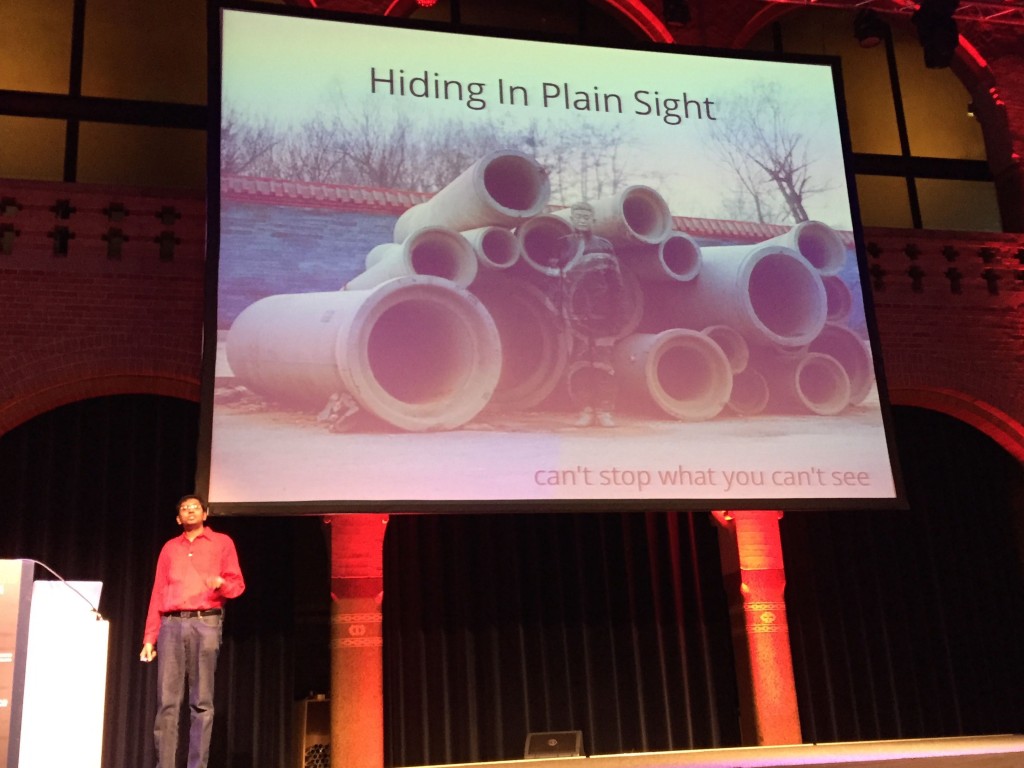 Stegosploit is not a new 0-day exploit with a nice name and logo. Itâ€™s a technique to deliver browser exploits via pictures. To achieve this we need an attack payload, a â€œsafeâ€ decoder which can transform pixels into dangerous data. How?

How to decode in the browser? Using the HTML5 CANVAS (so, only available in modern browsers). The next step is to run the decoder automatically in the browser. To achieve this, we have IMAJS, depending on the tag used, a browser will display an image or execute it. Why is this attack possible? Because browsers follows this principle:

Browsers accept unknown tags and get pwned! The talk ended with some nice demos of exploits popping up calc.exe or Meterpreter sessions. Keep an eye on this technique, itâ€™s amazing to own a user!

This closed the first day! Note that slides are uploaded after each talk and available here.