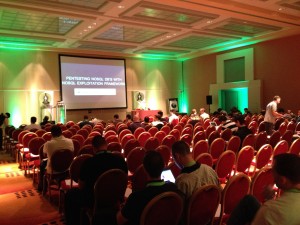 Today started the 2014 edition of Hack in Paris, a French security conference held in Disneyland Resort Paris – a very nice place for such kind of event! The conference started with a sunny sky over the conference centre in the New York hotel. I arrived just in time to register and to grab some coffee. Here is my wrap-up for the first day. Happy reading!

The opening keynote was presented by Winn Schwartau, a regular speaker at HIP! This time, he spoke about â€œBeyond Information Warfare: Hack Early, Hack Hardâ€. The main message delivered by Winn was: â€œWe are still defending against the past. To defend, you have to know how to attackâ€. 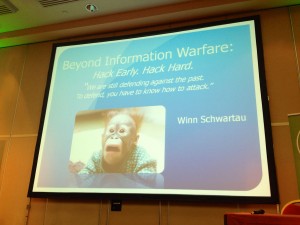 As explained by Winn, he grew up â€œanalogâ€ (read: with no bits nor bytes). At the beginning, he had to build everything by his own. In the nineties, the message broadcasted by authorities was: â€œNo, we donâ€™t have to worry about hacker!â€. The government was there to protect us. Some predictions from 1991:

Everybody thought Â that it will never happen and guess what? Today, we have a convergence between privacy and security based on three domains: cyber, physical andâ€¦ people! Winnâ€™s message was to focus on future stuff. Ok, XSS or SQLi are still a major threat but itâ€™s old techniques. We must focus on the next generation or weâ€™ll loose. We have a life cycle curve of technology containing the following steps:
Some examples of evolving technologies that we could further test: chat bots (calling computers), autonomous driving cars and, of course, mobile devices. They follow the same path as our first generation computers, they are facing the same issues. The story repeats again and again with the same failure â€¦ that we already know! Winn used a nice acronym: â€œIoTâ€ is not the â€œInternet of Thingsâ€ but the â€œInternet of Terrorâ€ ;-). Another example? UAVâ€™s (or drones): companies start to develop nice services using drones (like pizza delivery) but who evaluated the risks? Starting from simple devices, we add more and more features and they become unsafe. Think about old mobile phones: we added texting features (SMS), then they connected to the Internet (TCP/IP stack added), became PDAâ€™s and today they replace computers for most of our tasks. Winnâ€™s conclusions: We are making the same mistakes again and again. Security must be addressed at the early stage of a new technology development. Avoid the â€œweâ€™ll fix it laterâ€ or â€œDonâ€™t worry, weâ€™ll be fineâ€.

The first regular speaker was Paul CogginsÂ with a presentation called â€œDigital Energy – BPTâ€. If Winn explained in his keynote that we must look further and take care of new technologies, Paul explained how critical infrastructures are still owned today using old fashioned attacks. For me, the keynote and this talk went in opposite directions. 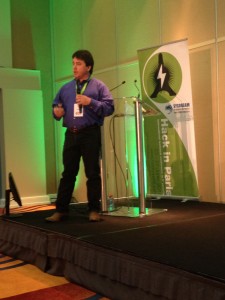 The fact that critical infrastructure are easily compromised today is called â€œBPTâ€ or â€œBasic Persistent Threatâ€ (at the opposite of APT). Most critical infrastructures suffer of very basic security issues: Internet access is available at multiple levels, default passwords are used, vendors need remote access, â€¦ Itâ€™s not uncommon to see a dual-home Windows box used between a corporate and a SCADA environment. Paul reviewed some (nightmare) stories where infrastructure were compromised using simple attacks like:

After a first coffee break, Thomas Lei Wang,Â from Baidu – the Chinse search engine, presented â€œBreaking Through the Bottleneck: A look at mobile malware spreadâ€. The talk started with an impressive number: Mobile threats increased by 957% over past year! The top goal of malware developers is to steal money (71%). Our mobile devices have money and privacy. It can be very harmful if compromised. 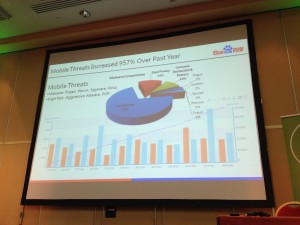 The goal of the presentation was to describe how malwares spread? Thomas reviewed 12 (!) ways:

To summaryze the talk: malwares spread via different techniques across regions/countries. The main infection vector remains the 3rd party app sotres and forums, femtocell increases rapidly and USB is the most dangerous way! If you want to have a look at some malicious code for mobile phones, Thomas has an online archive containing all the malware samples mentioned in his talk:Â hxxp://pan.baidu.com/s/1c06E7T2 (password: HIP2014Thomas). This talk was very interesting!

Â Then Joseph Pi Rodriguez & Pedro Guillen Nuhez presented â€œFuzzing, reversing & mathsâ€. The talk title was not clear because they focused their research on backup solutions and more precisely the communications between clients and servers. Why backup solutions? Because itâ€™s a critical component of IT infrastructure, all companies have one and they are sold as a security product (they are trusted). A first remark: vendors of backup solutions do not focus on security! 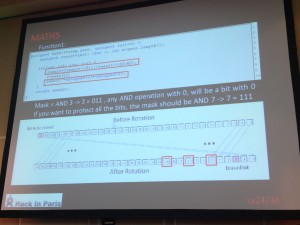 Joseph & Pedro found a lot of 0-day vulnerabilities and contacts with vendors were not very successful. The explained in details how they reverse engineered different solutions and found interesting vulnerabilities. The â€œvictimsâ€ were:

Backup solutions are interesting targets for attackers. Why? Usually, they contain sensitive data (copy of all files). They are trusted in the infrastructure. They can execute commands when backup are completed. They presented several demos to abuse client/server authentication processes, to list files from the C: drive or even make a permanent DoS!
After a cool lunch break in Disney Village, Francis Alexander presented â€œPentesting NoSQL Exploitation Frameworkâ€. The talk started with a review of NoSQL DB features. Francis reviewed different flavours of NoSQL from the open source landscape and how they can be abused. If youâ€™re interested, have a look at the framework developed by Francis: â€œNoSQL Exploitation Frameworkâ€ available at www.nosqlproject.com. 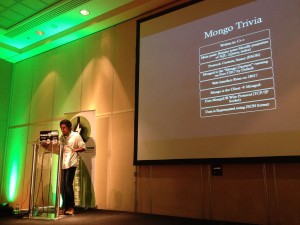 Krzysztof Kotowicz, working for Google, presented his research about JavaScript crypto: Â â€œBitting into the forbidden fruit, lessons from trusting Javascript cryptoâ€. It started with a question towards the audience: Who think that doing crypto is JS is a good/bad idea? A lot of people already discussed about this topic but Krzystof performed his own research. Usually, Javascript crypto considered harmful: 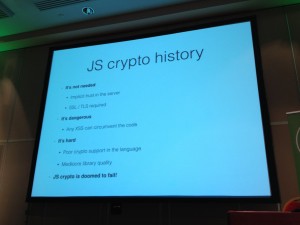 Some examples of applications using JavaScript crypto? We have crypto.cat, mailvelope.com or openpgpjs.org. The talk was a complete demonstration that the language has many weaknesses which impact crypto operations. The process was:

Developers donâ€™t use types and this could cause problems with crypto. Cryptocat was given as an example. Krzysztof explained how a user Â â€œ__proto__â€ could break the chat! JavaScript has also silent errors and out of bound array access to not throw an error! The next issue is the context within JavaScript code is execute: in the browser! It runs in a JS engine with different APIâ€™s, different restrictions/policies (Same Origin Policy, iframe sandbox, etc). Browser have a nice attack surface (network stack, HTML parser, JS engine). For JS crypto, the browser is the OS and the browser security = host security. With a difference: the application delivery: we donâ€™t install websites like apps. For Krzysztof, the best way to reduce the attack surface is to run JavaScript crypto code as a browser extension! This was a very good talk, very didactic!

After the afternoon coffee break, John Butterworth came to talk about UEFIÂ (â€œUnified Extensible Firmware Interfaceâ€). His talk title wasÂ â€œDefeating UEFI/Win8 secure bootâ€. Old PCâ€™s use a BIOS to initialize the system and boot the OS. This BIOS is very old and lack of security controls but modern platforms implement controls to protect the firmware. 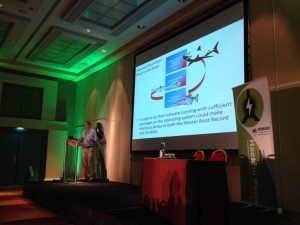 UEFI BIOS is the successor of the classic PC BIOS. It implements a feature called â€œsecure bootâ€. The security is better but it cannot prevent the inimitable malicious write to the boot loader. John explained deeply how secure boot can be abused. Starting with Windows 8, Microsoft provides an API to interact with secure boot. Here are some attack scenarioâ€™s explained by John:

Finally, Thomas RothÂ presented â€œARM Arch64 – writing exploits for the next ARM architectureâ€. Thomas is one of those guys who have a very strong knowledge of their topic. He reviewed the new ARM 64bits architecture and how to write exploit for this kind of CPU. I was lost 😉 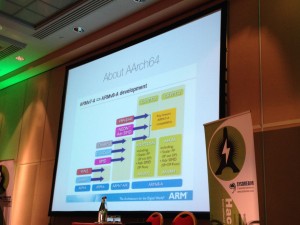 And, this is it for the first day, stay tuned for the second day!