I’m just back from the last ISSA Belgium event organized tonight at Verizon premises. Wade Baker, director of risk intelligence for Verizon and creator, author and primary analyst for Verizonâ€™s DBIR series, presented the analysis, findings and recommendations of the 2011 version of Verizon’s DBIR. If you are an infosec professional, for sure (well I hope ;-)) you know what’s behind this acronym. It means: “Data Breaches Investigations Report“. To resume very briefly, this document explains how sensitive data is stolen, by who and how. Today, most organizations want to have answers on the following questions: “Are we secure?” and “How to prove that we are secure?” (both must be answered with a limited resources and available date).

Wade started his presentation by defining some terms like “uncertainty” and “equivocality“. One of the DBIR goals is to reduce the uncertainty and equivocality. I noted his remark about the answers make by people about what they consider as “greatest threats“? Not all of their answers are threats. Example: a huge database.

Then, Wade explained how the study was conducted. It is based on the VERIS framework (“Verizon Enterprise Risk and Incident Sharing“). VERIS is a set of metrics designed to build a common language to describe security incidents. An incident is “a chain of events” and every event is composed of the following elements:

More information about this framework is available here.

The rest of the presentation was a review of all the document with Wade’s comments. What I remembered:

About this last point, IDS detected the breach in less than 1% and no incident was detected by a proper log review mechanism. I asked Wave if it was due to a lack of log management process or a badly implemented solution. For him, it’s just because most organization still today do not take care of their logs! Why I’m not surprised? 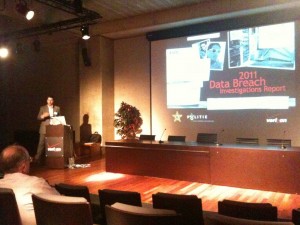 Some relevant questions were asked by the audience: First, the report does not take into account the value of a stolen record. Example: one credit-card number does not have the same value as a formula stolen from a pharmaceutic company. Second,Â  is it due to the VERIS framework which try to categorize all incidents in different classes but lot of percentages given in the presentation did not make a total of 100%. Strange.

The complete report is a huge document of 74 pages which is not easy to read. That was a nice initiative from ISSA to invite Wave to discuss about this topic. It was completely reviewed in two hours. The whole document is not easy to read and compiles lot of numbers organized in tables, bar-graphs and pie-charts. But it contains useful facts that must be understood by your internal organization or customers.

One of the conclusions I liked: “If done consistently, the basic security is enough in most cases“. Most of the incident are still today due to stupid mistakes. Do I need to give the Sony story as a bad example?

Small gift, a printed version was available for everybody. The electronic version is available here.