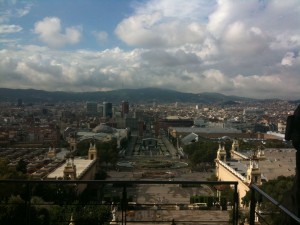 This week promises to be a busy one. I woke up early to catch my plane to Barcelona! The flight was delayed due to a strike in France but I arrived not too late and just missed the keynote. Barcelona is a very beautiful city and the place where is organized the conference is amazing with a nice view on the city (more pictures to come).

This is the second edition of SOURCE in Barcelona. From the organizers, the number of registrations grew from fifty to eighty. Not bad! I found back a lot of friends. After all, that’s why conferences are also organized:Â  To keep your network up-to-date! I like the SOURCE atmosphere, not too much participants is a good point. Two separate rooms with business talks on one side and technical talks on the other one. The rooms are nice and small enough to allow interaction s with the speakers (no need to use microphones), I like that! The ambiance is very relaxing and everybody feels like home. Interesting discussions with interesting guys!

What about the talks? This first day proposed good various topics:

One of the presentation I expected (Wim Remes about SIEM) was postponed to tomorrow due to a last minute planning change. If you would like to follow the conference via Twitter, follow the #SourceBCN hashtag, we are a few to post updates. That’s done for today. Now, let’s perform some social networking at the Socko restaurant not far from the beach 😉