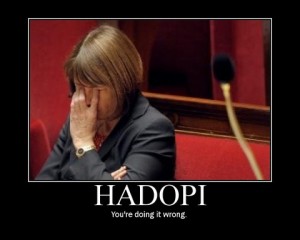 After an HADOPI law voted in France, other countries follow the same example.Â  A politician is trying to introduce the same system in Belgium as an attempt to fight the exchange of illegal material on the Internet (via peer-to-peer networks). For those who aren’t aware of the HADOPI law, it is also called “Riposte GraduÃ©e” in French or “Graduated Response”. The goal is to fight the “bad guys”Â  (and, NO,Â  “hackers” is certainly not the right term here!) with graduated deterrents: notifications, fines up to a disconnect from the Internet (or a speed limitation). I did not yet blogged over the HADOPI law but if the same project started in Belgium, it’s time to react!

The Senator Philippe Monfils already introduced a project of law in the beginning of 2010. A few days ago, he came back with a modified proposition (article in French) and suggested now to involve the Internet Service Providers. ISPs have already a legal obligation to cooperate with the local authorities. Requests are typically: who used the IP address “x” at time “y”. But, with the new law, they could be prosecuted if they do not collaborate in a efficient way. ISP always presented themselves as providers of “pipes” to the Internet. You use their services like you take the speedways to go from a point “A” to a point “B”. If you drive at 180km/h, the companies which maintain the speedway are not responsible of your behavior. Or can a manufacturer be held responsible for a holp-up? There are plenty of stories where robbers used an excavator to attack banks.

While keeping aside the factÂ  that downloading copyrighted material is illegal, I’m comparing theÂ  politicians or the future organizations responsible of tracking the bad-users to Don Quichotte fighting against wind mills! All IT professionals and Internet users which a little background will tell you: This law won’t solve the problem.Â  At best, the traffic will be slightly reduced. The non-technical usersÂ  (“the average user”) will be afraid and stop downloading their weekly MP3 albums but the real “leechers” won’t be worried. On a technical point of view, there will always have new evasive tools to prevent the detection of illegal traffic.

Another Belgian party proposed a “global license”. A few amount of money will be added by the ISP to the users monthly bill. Wait! In the beginning of 2010, a new tax was launched for all medias capable to store digital medias (CDs, DVDs, USB sticks, external disks, NAS, etc). For me it looks redundant. Why should people who never download illegal material pay for the others? (They are not many but there are still). My opinion is that the project of law made by Philippe Monfils is just a new “buzz” to warn the citizens that downloading illegal material is bad. Just have a look at the comments posted in forums or below the articles. It’s also a way to reassure the majors.Â  But like the picture says: “You are doing it wrong!”