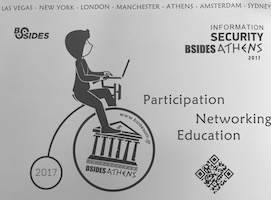 The second edition of BSides AthensÂ was planned this Saturday. I already attended the first edition (my wrap-up is here) and I was happy to be accepted as a speaker for the second time! Â This edition moved to a new location which was great. Good wireless, air conditioning and food. The day was based on three tracks: the first two for regular talks and the third one for the CTP and workshops. The “boss”, Grigorios Fragkos introduced the 2nd edition. This one gave more attention to a charity program called “the smile of the child” which helps Greek kids to remain in touch with tmosthe new technologies. A specific project is called “ODYSSEAS” and is based on a truck that travels across Greek to educate kids to technologies like mobile phones, social networks, … The BSides Athens donated to this project. A very nice initiative that was presented by Stefanos Alevizos who received a slot of a few minutes to describe the programÂ (content in Greek only).

The keynote was assigned to Dave Lewis who presented “TheÂ Unbearable Lightness of Failureâ€. The main fact explained by Dave is that we fail but…we learn from our mistakes! In other words, “failure is an acceptable teaching tool“. The keynote was based on many facts like signs. We receive signs everywhere and we must understand how to interpret them or the famousÂ Friedrich Nietzsche’s quote: “That which does not kill us makes us stronger“. We are facing failures all the time. The last good example is the Wannacry bad story which should never happen but… You know the story! Another important message is that we don’t have to be afraid t fail. We also have to share as much as possible not only good stories but also bad stories. Sharing is a key! Participate in blogs, social networks, podcasts. Break out of your silo! Dave is a renowned speaker and delivered a really good keynote!

Then talks were split across the two main rooms. For the first one, I decided to attend the Thanissis Diogos’s presentation about “Operation Grand Mars“. In January 2017, Trustwave published an article which described this attack. Thanassis came back on this story with more details. After a quick recap about what is incident management, he reviewed all the fact related to the operation and gave some tips to improve abnormal activities on your network. It started with an alert generated by a workstation and, three days later, the same message came from a domain controller. Definitively not good! The entry point was infected via a malicious Word document / Javascript. Then a payload was download from Google docs which is, for most of our organizations, a trustworthy service. Then he explained how persistence was achieved (via autorun, scheduled tasks) and also lateral movements. The pass-the-hash attack was used. Another tip from Thanissis: if you see local admin accounts used for network logon, this is definitively suspicious! Good review of the attack with some good tips for blue teams.

My next choice was to move to the second track to followÂ Konstantinos Kosmidis‘s talk about machine learning (a hot topic today in many conferences!). I’m not a big fan of these technologies but I was interested in the abstract. The talk was a classic one: after an introduction to machine learning (that we already use every day with technologies like the Google face recognition, self-driving card or voice-recognition), why not apply this technique to malware detection. The goal is to: detect, classify but, more important, to improve the algorithm! After reviewing some pro & con, Konstantinos explained the technique he used in his research to convert malware samples into images. But, more interesting, he explained a technique based on steganography to attack this algorithm. The speaker was a little bit stressed but the idea looks interesting. If you’re interested, have a look at his Github repository.

Back to the first track to followÂ Professor Andrew BlythÂ with “The Role of Professionalism and Standards in Penetration Testing“. The penetration testing landscape changed considerably in the last years. We switched to script kiddies search for juicy vulnerabilities to professional services. The problem is that today some pentest projects are required not to detect security issues and improve but just for … compliance requirements. You know the “checked-case” syndrome. Also, the business evolves and is requesting more insurance. The coming GDP European regulation will increase the demand in penetration tests. Â But, a real pentest is not a Nessus scan with a new logo as explained Andrew! We need professionalism. In the second part of the talk, Andrew reviewed some standards that involve pentests: iCAST, CBEST, PCI, OWASP, OSSTMM.

After a nice lunch with Greek food, back to talks with the one ofÂ Andreas NtakasÂ and Emmanouil Gavriil about “Detecting and Deceiving the Unknown with Illicium”.Â They are working for one of the sponsors and presented the tool developed by their company: Illicium. After the introduction, my feeling was that it’s a new honeypot with extended features. Â Not only, they are interesting stuff but, IMHO, it was a commercial presentation. I’d expect a demo. Also, the tool looks nice but is dedicated to organization that already reached a mature security level. Indeed, before defeating the attacker, the first step is to properly implement basic controls like… patching! What some organizations still don’t do today!

The next presentation was “I Thought I Saw a |-|4><0.-” by Thomas V. Fisher. Â Many interesting tips were provided by Thomas like:

The model presented by Thomas was based on 4 A’s: Assess, Analyze, Articulate and Adapt! A very nice talk with plenty of tips!

The next slot was assigned toÂ Ioannis StaisÂ who presented his framework called LightBulb. The idea is to build a framework to help in bypassing common WAF’s (web application firewalls). Ioannis explained first how common WAF’s are working and why they could be bypassed. Instead of testing all possible combinations (brute-force), LightBuld relies on the following process:

Then,Â Anna Stylianou presented “Car hacking â€“ a real security threat or a media hype?“. The last events that I attended also had a talk about cars but they focused more on abusing the remote control to open doors. Today, it focuses on ECU (“Engine Control Unit”) that are present in modern cars. Today a car might have >100 ECU’s and >100 millions lines of code which means a great attack surface! They are many tools available to attack a car via its CAN bus, even the Metasploit framework can be used to pentest cars today! The talk was not dedicated to a specific attack or tools but was more a recap of the risks that cars manufacturers are facing today. Indeed, threats changed:

Some infosec gurus also predict thatÂ autonomous cars will be used as lethal weapons! As cars can be seen as computers on wheels, the potential attacks are the same: spoofing, tampering, repudiation, disclosure, DoS or privilege escalation issues.

The next slot was assigned to me. I presented “Unity Makes Strength” and explained how to improve interconnections between our security tools/applications. The last talk was performed by Theo Papadopoulos:Â A “Shortcut” to Red Teaming. He explained how .LNK files can be a nice way to compromize your victim’s computer. I like the “love equation”: Word + Powershell = Love. Step by step, Theo explained how to build a malicious document with a link file, how to avoid mistakes and how to increase chances to get the victim infected. I like the persistence method based on assigning a popular hot-key (like CTRL-V) to shortcut on the desktop. Windows will trigger the malicious script attached to the shortcut and them… execute it (in this case, paste the clipboard content). Evil!

The day ended with the CTF winners announce and many information about the next edition of BSides Athens. They already have plenty of ideas! It’s now time for some off-days across Greece with the family…