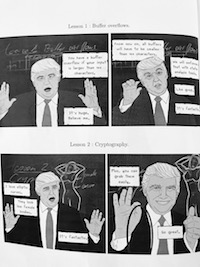 Here is my wrap-up for the last day. Hopefully, after the yesterdayâ€™s social event, the organisers had the good idea to start laterâ€¦ The first set of talks was dedicated to presentation tools.

The first slot was assigned toÂ Florian Maury, SÃ©bastien Mainand: â€œRÃ©utilisez vos scripts dâ€™audit avec PacketWeaverâ€. When you are performed audit, the same tasks are already performed. And, as we are lazy people, Florian & SÃ©bastienâ€™s idea was to automate such tasks. They can be to get a PCAP, to use another tool like arpspoof, to modify packets using Scapy, etcâ€¦ The chain can quickly become complex. By automating, itâ€™s also more easy to deploy a proof-of-concept or a demonstration. The tool used a Metasploit-alike interface. You select your modules, you execute them but you can also chain them: the output of script1 is used as input of script2. The available modules are classified par ISO layer:

The tool is available here.

The second slot was about â€œcpu_rec.pyâ€. This tool has been developed to help in the reconnaissance of architectures in binary files. A binary file contains instructions to be executed by a CPU (like ELF or PE files). But not only files. It is also interesting to recognise firmware’s or memory dumps. At the moment, cpu_rec.py recognise 72 types of architectures. The tool is available here.

And we continue with another tool using machine learning.Â â€œLe Machine Learning confrontÃ© aux contraintes opÃ©rationnelles des systÃ¨mes de dÃ©tectionâ€Â presented by AnaÃ«l Bonneton and Antoine Husson. The purpose is to detect intrusions based on machine learning. The classic approach is to work with systems based on signatures (like IDS). Those rules are developed by experts but can quickly become obsolete to detect newer attacks. Can machine learning help? AnaÃ«l and Antoine explained the tool that that developed (â€œSecuMLâ€) but also the process associated with it. Indeed, the tool must be used in a first phase to learning from samples. The principle is to use a â€œclassifierâ€ that takes files in input (PDF, PE, â€¦) and return the conclusions in output (malicious or not malicious). The tool is based on the scikit-learn Python library and is also available here.

Then, Eric Leblond came on stage to talk aboutâ€¦ Suricata of course! His talk title was â€œÃ€ la recherche du mÃ©chant perduâ€. Suricata is a well-known IDS solution that donâ€™t have to be presented. This time, Eric explained a new feature that has been introduced in Suricata 4.0. A new â€œtargetâ€ keyword is available in the JSON output. The idea arise while a blue team / read team exercise. The challenge of the blue team was to detect attackers and is was discovered that itâ€™s not so easy. With classic rules, the source of the attack is usually the source of the flow but itâ€™s not always the case. A good example of a web server returned an error 4xx or 5xx. In this case, the attacker is the destination. The goal of the new keyword is to be used to produce better graphs to visualise attacks. This patch must still be approved and merge in the code. It will also required to update the rules.

The next talk was the only one in English: â€œDeploying TLS 1.3: the great, the good and the bad: Improving the encrypted web, one round-trip at a timeâ€ byÂ Filippo ValsordaÂ & Nick Sullivan. After a brief review of the TLS 1.2 protocol, the new version was reviewed. You must know that, if TLS 1.0, 1.1 and 1.2 were very close to each others, TLS 1.3 is a big jump!. Many changes in the implementation were reviewed. If youâ€™re interested here is a link to the specifications of the new protocol.

After a talk about crypto, we switched immediately to another domain which also uses a lot of abbreviations: telecommunications. The presentation was performed by Â Olivier Le Moal, Patrick Ventuzelo, Thomas CoudrayÂ and was called â€œSubscribers remote geolocation and tracking using 4G VoLTE enabled Android phoneâ€. VoLTE means â€œVoice over LTEâ€ and is based on VoIP protocols like SIP. This protocols is already implemented by many operators around the world and, if your mobile phone is compatible, allows you to perform better calls. But the speakers found also some nasty stuff. They explained how VoLTE is working but also how it can leak the position (geolocalization) of your contact just by sending a SIP â€œINVITEâ€ request.

To complete the first half-day, a funny presentation was made about drones. For many companies, drones are seen as evil stuff and must be prohibited to fly over some Â places. The goal of the presented tool is just to prevent drones to fly over a specific place and (maybe) spy. There are already solutions for this: DroneWatch, eagles, DroneDefender or SkyJack. Whatâ€™s new with DroneJack? It focuses on drones communicating via Wi-Fi (like the Parrot models). Basically, a drone is a flying access point. It is possible to detected them based on their SSIDâ€™s and MAC addresses using a simple airodump-ng. Based on the signal is it also possible to estimate how far the drone is flying. As the technologies are based on Wi-Fi there is nothing brand new. If you are interested, the research is available here.

When you had a lunch, what do you do usually? You brush your teeth. Normally, itâ€™s not dangerous but if your toothbrush is connected, it can be worse! Axelle Apvrille presented her research about a connected toothbrush provided by an health insurance company in the USA. The device is connected to a smart phone using a BTLE connection and exchange a lot of data. Of course, without any authentication or any other security control. The toothbrush even continues to expose his MAC address via bluetooth all the tile (you have to remove the battery to turn it off). Axelle did not attached the device itself with reverse the mobile application and the protocol used to communicate between the phone and the brush. She wrote a small tool to communicate with the brush. But she also write an application to simulate a rogue device and communicate with the mobile phone. The next step was of course to analyse the communication between the mobile app and the cloud provided by the health insurance. She found many vulnerabilities to lead to the download of private data (up to picture of kids!). When she reported the vulnerability, her account was just closed by the company! Big fail! If you pay your insurance less by washing your teeth correctly, itâ€™s possible to send fake data to get a nice discount. Excellent presentation from Axelleâ€¦

To close the event, the ANSSI came on stage to present a post-incident review of the major security breach that affected the French TV channel TV5 in 2015. Just to remember you, the channel was completely compromised up to affecting the broadcast of programs for several days. The presentation was excellent for everybody interested in forensic investigation and incident handling. In a first part, the timeline of all events that lead to the full-compromise were reviewed. To resume, the overall security level of TV5 was very poor and nothing fancy was used to attack them: contractorâ€™s credentials used, lack of segmentation, default credentials used, expose RDP server on the Internet etc. An interesting fact was the deletion of firmwares on switches and routers that prevented them to reboot properly causing a major DoS. They also deleted VMâ€™s. The second part of the presentation was used to explain all the weaknesses and how to improve / fix them. It was an awesome presentation!

My first edition of SSTIC is now over but I hope not the last one!