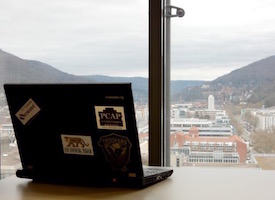 This is my wrap-up for the 2nd day of â€œNGIâ€ at TROOPERS. My first choice for today was â€œAuthenticate like a bossâ€ by Pete Herzog. This talk was less technical than expected but interesting. It focussed on a complex problem: Identification. Itâ€™s not only relevant for users but for anything (a file, an IP address, an application, â€¦). Pete started by providing a definition. Authentication is based on identification and authorisation. But identification can be easy to fake. A classic example is the hijacking of a domain name by sending a fax with a fake ID to the registrar – yes, some of them are still using fax machines! Identification is used at any time to ensure the identity of somebody to give access to something. Itâ€™s not only based on credentials or a certificate.

Identification is extremely important. You have to distinguish the good and bad at any time. Not only people but files, IOCâ€™s, threat intelligence actors, etc. For files, metadata can help to identify. Another example reported by Pete: the attribution of an attack. We cannot be 100% confident about the person or the group behind the attack.The next generation Internet needs more and more identification. Especially with all those IoT devices deployed everywhere. We donâ€™t even know what the device is doing. Often, the identification process is not successful. How many times did you send a â€œhelloâ€ to somebody that was not the right person on the street or while driving? Why? Because we (as well as objects) are changing. We are getting older, wearing glasses, etcâ€¦ Â Every interaction you have in a process increases your attack surface the same amount as one vulnerability. Â What is more secure? Let a user choose his password or generate a strong one for him? Heâ€™ll not remember ours and write it down somewhere. In the same way, whatâ€™s best? a password or a certificate? An important concept explained by Pete is the â€œintentâ€. The problem is to have a good idea of the intent (from 0 – none – to 100% – certain).

Example:Â If an attacker is filling your firewall state table, is it a DoS attack? If somebody is performed a tracerouteÂ to your IP addresses, is it a foot-printing? Can be a port scan automatically categorized as hunting? And a vulnerability scan will be immediately followed by an attempt to exploit? Not always… It’s difficult to predict specific action. To conclude, Pete mentioned machine learning as a tool that may help in the indicators of intent.

After an expected coffee break, I switched to the second track to follow â€œIntroduction to Automotive ECU Researchâ€ by Dieter Spaar. ECU stands for â€œElectronic Control Unitâ€. Itâ€™s some kind of brain present in modern cars that helps to control the car behaviour and all its options. The idea of the research came after the problem that BMW faced with the unlock of their cars. Dieterâ€™s Motivations were multiple: engine tuning, speedometer manipulation, ECU repair, information privacy (what data are stored by a car?), the â€œVW scandalâ€ and eCall (Emergency calls). Sometimes, some features are just a question of ECU configuration. They are present but not activated. Also, from a privacy point of view, what infotainment systems collect from your paired phone? How much data is kept by your GPS? ECUâ€™s depend on the car model and options. In the picture below, yellow Â blocks are ECU activated, others (grey) are optional (this picture is taken from an Audi A3 schema): 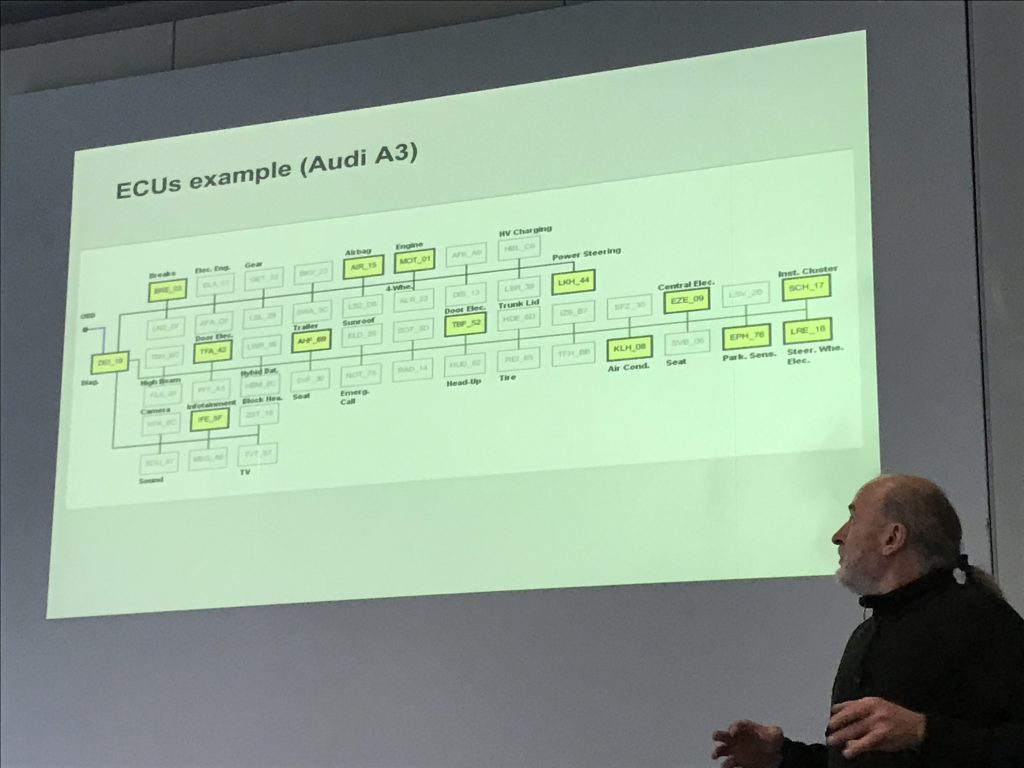 Interaction with the ECU is performed via a bus. They are different bus systems: the most known isÂ CAN (Controller Area Network), MOST (Media Oriented System Transport), Flexray, LIN (Local Interconnected Network), Ethernet or BroadR-Reach. Interesting fact, some BMW cars have an Ethernet port to speed up the upgrades of the infotainment (like GPS maps). Ethernet provides more bandwidth to upload big files. ECU hardware is based on some typical microcontrollers like Renesas, Freescale or Infineon. Infotainment systems are running on ARM sometimes x86. QNX, Linux or Android. A special requirement is to provide a fast response time after power on. Dieter showed aÂ lot of pictures with ECU where you can easily identify main components (Radio, infotainment, telematics, etc). Many of them are manufactured by Peiker. This was a very quick introduction but this demonstrated that they are still space for plenty of research projects with cars. During the lunch break, I had an interesting chat with two people working at Audi. Security is clearly a hot topic for car manufacturers today!

For the next talk, I switched again to the other track and attended â€œPUF â€™nâ€™ Stufâ€ by Jacob Torrey & Anders Fogh. The idea behind this strange title was â€œGetting the most of the digital world through physical identitiesâ€. The title came from a US TV show popular in the 60’s. Today, withinÂ our ultra-connected digital world, we are moving our identity from a physical world and it becomes difficult to authenticated somebody. We are losing the “physical” aspect. Humans can quickly spot an imposter just by having a look at a picture and after a simple conversation. Even if you don’t personally know the person. But to authenticate people via a simple login/password pair, it becomes difficult in the digital world. The idea of Jacob & Anders was to bring aÂ strong physical identification in the digital world. The concept is called “PUF” or “Physically Uncloneable Function“. To achieve this, they explained how to implement a challenge-response function for devices that should return responses as non-volatile as possible. This can be used to attest the execution state or generate device-specific data. They reviewed examples based on SRAM, EEPROM or CMOS/CCD. The latest example is interesting. The technique is called PRNU and can be used to uniquely identify image sensors. This is often used in forensic investigation to link a picture to a camera. You can see this PUF as a dual-factor authentication. But there are caveats like a lack of proper entropy or PUF spoofing. Interesting idea but no easy to implement in practical cases.

After the lunch, Stefan Kiese had a two-hours slot to present â€œThe Hardware Striptease Clubâ€. The idea of the presentation was to briefly introduce some components that we can find today in our smart houses and see how to break them from a physical point of view. Stefan briefly explained the methodology to approach those devices.Â When you do this, never forget the impact (loss of revenue, theft of credentials, etcâ€¦ or worse life (pacemakers, cars). Some reviewed victims:

It made an electronic crash course but also insisted on the risks to play with electricity powered devices! Then, people were able to open and disassemble the devices to play with them.

I didn’t attend the second hour because another talk looked interesting: â€œMetasploit hardware bridge hackingâ€ by Craig Smith. He is working at Rapid7 and is playing with all â€œmovingâ€ things from cars to drones. To interact with those devices, a lot of tools and gadgets are required. The idea was to extend the Metasploit framework to be able to pentest these new targets. With an estimation of 20.8 billions of IoT devices connected (source: Gartner), pentesting projects around IoT devices will be more and more frequent. Many tools are required to test IoT devices: RF Transmitters, USB fuzzers, RFID cloners, JTAG devices, CAN bus tools, etc. The philosophy behind Metasploit remains the same: based on modules (some exploits, some payload, some shellcodes). New modules are available to access relays which talk directly to the hardware module. Example:

A Metasploit relay is a lightweight HTTP server that just makes JSON translations between the bridge and Metasploit.

Example: ELM327 diagnostic module can be used via serial USB or BT. Once connected all the classic framework features are available as usual:

Other supported relays are RF transmitter or Zigbee. This was an interesting presentation.

For the last time slot, there was two talks: one about vulnerabilities in TP-Link devices and one presented as “Looking through the web of pages to the Internet of Things“. I chose the second one presented byÂ Gabriel Weaver. The abstract did not describe properly the topic (or I did not understand it) but the presentation was a review of the research performed by Gabriel: “CTPL” or “Cyber Physical Topology Language“.

That’s close the 2nd day. Tomorrow will be dedicated to the regular tracks. Stay tuned for more coverage.