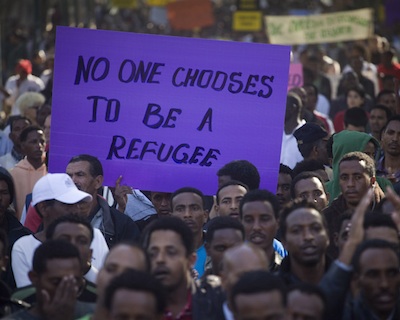 Everybody is aware of the massive amount of refugees crossing Europe borders to try to find a better life. I won’t start a debate about this, it’s not the goal of this blog. But, when I was contacted by a friend who asked me if I could help some refugees in Belgium, I decided to make my very little contribution to help them. The world is ever changing and today’s refugees use a lot of technologies: They all have smart phones and Internet became a mandatoryÂ tool to help them to keep contact with their friends, family and to search for useful information in their daily fight to find a more comfortableÂ situation. They are forums, groups, mailing lists where they exchange a lot of useful information. Working with temporary SIM cards and 3G/4G could quickly become very expensive. That’s whyÂ my friend asked to help him to deploy a WiFi solution close to their temporary location. Having spare hardware used for BruCON in my basement, it was easy to install something. We borrowed an Internet connection from the house next to their location, installed an access point, the firewall and, of course, some monitoring tools to keep an eye on the Internet usage (after all, we don’t know them and we have to protect ourselves too!). They stayed approximatively three weeks, using the Internet connectivity 24 hours a day. How? Which sites they visited? Which countries were contacted? Which protocols? Here are some interesting stats.

What about the applications used? They are aware of all modern mobile apps to stay in touch with their contact. Whatsapp is used a lot to make phone calls with their friends, family. Here are the top applications:

It’s not a surprise to find Facebook in first position. Google and Skype seem popular too. I was surprised by the bad position of Twitter!Â And what about the countries?

Many refugees who used the wireless connection are coming from Guinea, no surprise! I presume that Ireland and United Kingdom are in good position because they’reÂ two countries were many refugees would like to move. I’ve no idea why China came in 6th position? (“China is everywhere?”)

Now there are gone. I don’t know where they are, what is their next step but it was rewarding to receive many thanks from them!