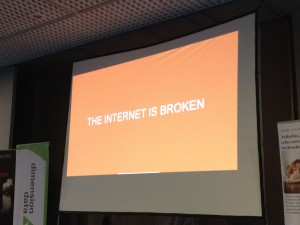 The third day is over! After the speaker dinner in a cool place and a very short night, I attended more talks today (no workshops). Let’s go for the daily quick wrap-up…

The first talk was â€œInternet scanning – conducting research on 0/0â€ presented by Mark SchloesserÂ from Rapid7 and is also a developer of the Cuckoo sandbox. The topic focused on the IPv4 address space of course. IPv6 could be nice for another talk but has many challenges.

Mark’s topic was not only the scanning part but also wide data-gathering. Example: when the port 80 is publicly available, the website behind is crawled. People think that scanning the Internet takes timeâ€¦ months? In reality, there are quite performant tools today like masscan or zmapÂ that are able to scan the complete Internet addresses space in less than one hour. Of course, this isÂ theoreticalÂ because packets are processed by many routers which can affect the overal performances of the scan. Scanning the Internet is not aÂ new topic and other projects exist for a while like Shodan, the shadowserver foundation, ErrataSec. Of course, Mark said that scanning the Internet is only performed for research purpose (in his case of course). He reviewed some interesting findings:

Mark presented a Rapid7 project called “Sonar” which helps to scan the Internet for specific ports/protocols. Here are some results:

To conclude, Mark said that, in such project, the collaboration is key! It is important to make data available to the infosec community. To achive this, a website exists: scans.io. It was a great talk to start the day!

The next talk was presented by Saumil Shah. Do we have to present him? Saumil is a very cool guy who comes always with new crazy ideas and who explains them with simple words and modesty. This time, he came with a talk called “Hacking with pictures“.

Saumil has been delivering exploits for some years. When you write exploits, the first goal is work below the radar with techniques like:

In 2011, he came with a cool attack called â€œ255 shades of greyâ€ and today it was a new one called “IMAJS” which consists of an image with embeded JavaScript. The concept: The same file can be used twice:

The evil trick is to use comments to hide the image data:

The JPEG format is event more powerful thanks to the EXIF data! But the problem is that some caracters must be avoided.Another demo was an exploit using an heap spray attack to pop up, guess what, a calc.exe! This technique was called “Stegosploit” by Saumil and is based on the vulnerability labeleldÂ MS14-035Â by Microsoft. The next idea was to have an attack based on some kind of “time machine”. The image is downloaded by the victim at a certain time but the exploitation occurs later. This could have a huge impact in incident response! Conclusions of this talk:

It was really a good presentation, my favourite of today!

After a short break, Paul RascagnÃ¨resÂ and Eric Leblond presented “D&D of malware with exotic C&C“. This was a good team: Paul is a respected malware researcher and Eric is a core developer of Suricata, the open source IDS.

Paul described different cases that he faced while doing malware analysis. How malwares communicate with their C&C servers? Then, Eric explained how to configure Suricata properly to catch the communications (while keeping the performances acceptable).

Conclusion of this talk: even if we have nice tools like dynamic sandox analysiss systems, itâ€™s still very useful to reverse the malware code to understand how the Â communicate and write powerful rules! Funny presentation made by two crazy guys!

Then, two presentations were scheduled but I did not follow them:Â Dominique Bongard spoke about WPS or “WiFi Protected Setup”. After a good description of the WPS working principles (You know the button you have on your router or the sticker on the bottom), Dominique explained the weaknesses of this system.

The next one was not a technical talk but a review of the cyberwar between Russia and Ukraine. Glib Pakharenko explained what hapened before and during the war between the two countries. The cyber attacks started before the revolution and they are not only hacking or DDoS. It can also be:

A good example was the one of Russia which hacked SmartTV’s in Ukraine and forced them to show terrorists channels!

The next talk was a presentation of mitmproxy by Maximilian Hils. This proxy plays man-in-the-middle and intercept HTTPS requests. This tools is free and basically allow you to inspect encrypted traffic between the browser and the server but not only! It can also:

The tools is console based andÂ really deserve to be part of your regular toolbox!

And we continued with another talk. This one was called “How I hacked my city” by Amihai Neiderman. This was a walkthough talk. Amihai told us a story. How it begun when I discovered a strange SSID “FREE_TLV” broadcasted on the street. Curious, like many of us, he tried to connect to it and found more and more information.

The next talk focused on exploiting Virtualbox via the 3D acceleration feature. This was called “Breaking out VirtualBox through 3D acceleration” by Francisco Falcon. When I read the abstract of this talk, my first reaction was: “But, how many people use this feature with VirtualBox? Who’s running games on VirtualBox?“. Anyway, Francisco found a great way to abuse this feature! Â Note that the VirtualBox developers already warn users in the document: “This code may contain bugs“.

Before explaining how to exploit the feature, he explained how it works. VirtualBox 3D acceleration is based on Chromium, a library that allow remote rendering of graphics (but nothing related to the browser). The flow of data is the following:

The second part of the talk was dedicated to the detailed explanation of how to exploit this architecture.

My last talk was the one of Garcia Sebastian who presented a nice way to detect botnets activities via the network traffic (“Botnets Behavioral Patterns in the Network“).

The idea behing this talk was based on the following question: How do we detect malwares? We can analyze binary files (the malware itself) or the generated traffic (to exfiltrate data, to communicate with the C&C). The files analysis can be static, dynamic but remains complex. And, it’s the same for the network traffic. What are the performed actions and how they change? An interesting statistics is how we analyse the network traffic?

The next question is: Is it working?

Sebastian’s idea was to focus on single connections (which is related to a specific action like: a DNS resolution, access to Google, a spam sent). He needed aggregation and created a 4-tuples based on: the source IP, the destination IP, the destination Port and the protocol. Then he explained how the model was created by analysing the behavior of each 4-tuples by extraction 3 features of each flow:

Based on the sizes of the flow, Sebastian explained how to assigned a specific caracterÂ to it (36 states possible). Based on this model, he was able to build a botnet dectection model based on the Markov Chain. A nice research and a nice talk!

I did not attend the last talk. The day finished with the celebration of the CTF winners. The regular conference is now over. Tomorrow, no more regular talks, just a few workshops are still scheduled. Good edition of hack.lu which remains a conference with a specific atmosphere. See you next year for the 11th edition!

Note: the slides are available here.