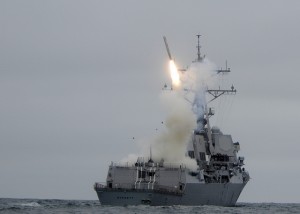 “Tomahawk” is the name of a popular cruise missile developed by General Dynamics in the seventies. But it is also the name of a free tool which helps to stress test security devices like firewalls or IDS. It has been written by Brian Smith from TippingPoint. This is well-known manufacturer of IDS solutions, acquired by HP in 2010.

Testing IDS solutions has always been a nightmare. Just flooding the box with tons of packets is not the best solution. Today, many firewalls jumped into the “Next Generation” train and propose also deep inspection of the packets up to layer 7 (the application layer). The goal of Tomahawk is to test your security devices using real traffic or attacks replayed from a pcap file. You can replay your own captures but they are on-line repositories of pcap files like pcapr or evilfingers where you can find interesting traces of attacks.

Tomahawk is designed to test the traffic from end-to-end (See the topology below). Tomahawk runs on a Linux machine with three NICs. Two are used to send (eth0) and receive (eth1) traffic. The third one is used to manage the box.

Tomahawk reads sessions from pcap files. First client’s packet is sent via eth0. If the packet reached eth1, it sends the first server’s packets to eth1, etc. There is a good tutorial on the website. Example of usage:

The flag “-a” allows you to rewrite IP addresses present in the original pcap file to your own addresses. Useful to map traffic to your DMZ or to a specific server.

In parallel to security tests, Tomahawk can also be used to perform performance tests. There are useful flags which allows to control how the traffic is generated:

Tomahawk is quite old and has not been upgraded for a while (version 1.1 was released in 2006) but it does its job quite well. Binaries are provided only for RedHat 7 (!) but it still compiles without too much problems on modern Linux distributions. On my Ubuntu, I had to comment the line referring to the include file “pcap-int.h” (which is not present anymore in recent libpcap-dev packages).

I’m not a big fan of IDS solutions. Often they provide a false sense of security. Deploying an IDS does not prevent you of maintaining a strong security policy for your devices and users. But Tomahawk is really interesting in some cases, like labs. It is available here.