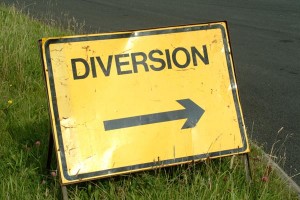 For a long time ago, I did not write about OpenBSD which remains one of my favorite operating system. The last version (4.7) was released in May and introduced, as usual, a lot of interesting changes.

OpenBSD comes of course with it’s own firewall called pf (“packet filter“). Plenty of features are available but pf gained even more power since the last OpenBSD release with the introduction of the divert sockets support (for both IPv4 & IPv6). What’s this?

First, divert sockets are not new. They are available for a while on FreeBSD (also supporting the pf firewall) or Linux since kernel version 2.2). When you need to intercept packets passing through your UNIX server, you use the library libpcap (and the associated tools like tcpdump) or raw sockets. But this operation remains “read only” – I mean – you just grab a copy of the packets for further analyze. Did you ever dream about a cool way to process packets outside the core firewall process and, even better, re-injecting them in the traffic flow? That’s the purpose of the divert sockets.

First of all, some important remarks:

If you always keep in mind those remarks, let’s see how divert sockets work. Let’s imagine a firewall between a private network and the Internet (see figure below). We can instruct the firewall to divert all outgoing packets on port TCP/80 to a process running on user space. 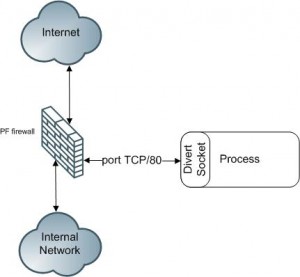 How to achieve this? At pf level, we configure the divers socket (via your pf.conf):

The process running in user space utilizes a special type of RAW socket called divert (IPPROTO_DIVERT) that allows you to receive and send like a regular socket. But here, the divert socket is bound to a port which is used by the firewall ($divert_port in the example above) to send packets. A basic example in C:

Once done, wait for incoming packets, process them and re-inject them (optional):

If you prefer to develop in Perl, there is a Net::Divert module available on the CPAN repository. Here is a little example:

Those are simple example, I’m not a developer ;-). What can you do with divert sockets? There are plenty of implementations:

Use your imagination! But, once again, take care of the security! Diverted packets will travel across different rings during the inspection!